September 2, 2022. In May, researchers at the Information Centre at the Canadian War Cemetery in Holten, The Netherlands honoured 27 soldiers of Ukrainian heritage that are buried in the cemetery.  Photos for 4 were missing and Pieter was asked if he could help.

….The 4 soldiers of Ukrainian heritage without photos ….

This posting is about Elie ANTONYSZYN, who was born March 10, 1923 in Rorketon, Manitoba, the son of Michael (Mike) and Lena (nee Dowhaniuk) Antonyszyn.  The only son, Elie had two younger sisters, Mary and Olga.

….Family of Elie Antonyszyn contact Pieter after a letter to the editor is published ….

On June 21, 2022 a Letter to the Editor about the search for a photo of Elie was published in the Dauphin Herald.

Letter to the Editor published in the June 21, 2022 edition of the Dauphin Herald.  (Clipping courtesy of Natalie Fee)

A few days after publication, Natalie Fee contacted Pieter with a photo of Elie, saying that the Letter to the Editor “…was passed to me from a friend as I no longer live in that area. I am Elie, Mary, & Olga’s youngest cousin; their mother Wasalena and my Grandpa John Dowhaniuk were brother and sister….” 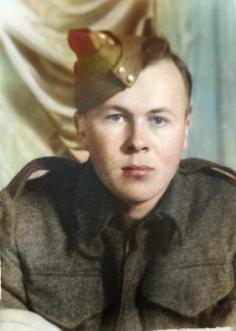 Elie enlisted on February 3, 1943 in Winnipeg, Manitoba, under the National Resources Mobilization Act. This was a compulsory national registration for military service, originally for home defence, but later for service overseas as WWII continued. (See https://www.thecanadianencyclopedia.ca/en/article/national-resources-mobilization-act)

At the time of enlistment, Elie was a high school student, in Grade 12, but was required to report for registration due to his age of 19.  As the only son of a farmer, he likely could have received an exemption from military service, had he asked for it.

The interviewer for his Personnel Selection Record noted that Elie was fluent in English and Ukrainian, and intended to become a pharmacist.  He played hockey, football, and baseball, and enjoyed playing cards and checkers.

He was described as being “…a bright country high school lad…. Courteous and steady, more of a student type. Appears dependable and has a happy manner…”

Elie was sent to Esquimalt, British Columbia for basic training, where he remained until April 15, 1943.  He was then transferred to #46 Light Anti-Aircraft Battery in Nanaimo, British Columbia.

…Elie was sent to Kiska, Alaska… 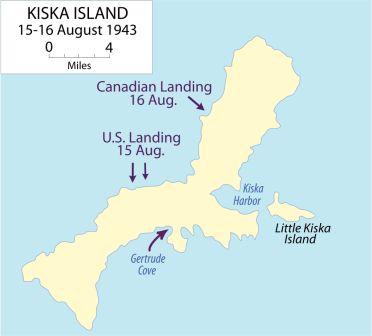 On July 12, 1943, Elie was assigned to participate in ‘special duty’ as Canadian support to Kiska, Alaska for the American led ‘Operation Cottage’. The idea was to liberate Kiska Island from Japanese forces, which had occupied it since June 7, 1942. No one seemed to be aware that the Japanese had left the Island on July 28, 1943, and it was unoccupied by the time Allied troops arrived on August 15, 1943. (See https://en.wikipedia.org/wiki/Operation_Cottage and http://www.canadiansoldiers.com/history/operations/operationcottage.htm)

As noted in Project 44’s Operation Cottage: Invasion of Kiska Island: “…Despite the lack of Japanese soldiers, there still were American and Canadian casualties. Some were wounded and killed in friendly fire as nervous soldiers fired into the fog amongst the confusion. Others were wounded and killed by enemy mines, booby-traps, and explosive ordinance left on the island. The Canadians sustained eight casualties, four dead and four wounded…” (See https://www.project44.ca/kiska)

While the Americans left Kiska by September 1, 1943, the Canadians remained for over 3 months longer.

C.P. Stacey’s ‘Official History of the Canadian Army in the Second World War: Volume I: Six Years of War: Canada, Britain and the Pacific’ recorded that troops lived “…in ‘winterized’ tents, and engaged in road and pier construction, transport fatigues, building and manning defences, and carrying on such training as conditions permitted. Fog, rain and wind made the island an acutely unpleasant residence, and the troops were heartily glad when the withdrawal to British Columbia began in November 1943. The last shipload of Canadians left Kiska on 12 January 1944….”  Elie returned to Canada on January 3, 1944.

On January 31, 1945 Elie left for the United Kingdom, arriving on February 9, 1945 and attached to the Canadian Army Reinforcement Unit (CARU).   He remained in the United Kingdom until May 2, 1945, when he was sent to northwest Europe and transferred to the 6th Canadian Anti-Tank Regiment, Royal Canadian Artillery.

On June 24, 1945 Elie was transferred to the 8th Light Anti-Aircraft Regiment, Royal Canadian Artillery.  While the Regiment was in The Netherlands, Elie died tragically on July 15, 1945, and was temporarily buried in the Roman Catholic Cemetery in Borculo.

…Elie was reburied in the Canadian War Cemetery in Holten…

On April 17, 1946, Elie was reburied in the Canadian War Cemetery in Holten, The Netherlands.

Grave of Elie Antonyszyn in the Canadian War Cemetery in Holten. (Photo courtesy of the Canadian Virtual War Memorial)

Natalie Fee wrote us that her “…husband’s uncle, Brian Batter went to Holten this spring to visit Elie’s grave.  Brian was a Lieutenant-Colonel (retired) in the Royal Winnipeg Rifles. Thank you for all of the hard work you do!…” 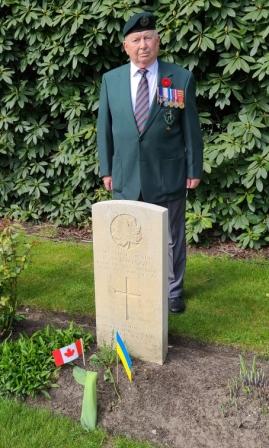 Brian Batter at the grave of Elie Antonyszyn.  Flags of Canada and Ukraine were placed by his grave. (Photo courtesy of Natalie Fee)

Elie’s sister Olga died in 1997, leaving his sister Mary the last of the siblings.  When she died in 2017 at the age of 93, her obituary contained a memory of her beloved brother: “….From her stories of when she was a child living in Rorketon, MB, racing her brother Elie home from school, or when he dared her to walk across a frozen pond for 25 cents, her stories about her brother were full of admiration….” (See https://passages.winnipegfreepress.com/passage-details/id-247494/ANTONYSZYN_MARY)

….Antonyszyn Lake in northern Manitoba named in his honour…..

Thank you to Natalie Fee for providing photos, and to the Dauphin Herald newspaper for publishing the photo request.  This was the last story in this series about soldiers of Ukrainian descent who are buried in the Canadian War Cemetery in Holten.

If you have a story to tell, please let Pieter know. Email him at memorialtrail@gmail.com, comment on the blog, or tweet to @researchmemori1.

…Missed the previous postings about the soldiers of Ukrainian heritage?…