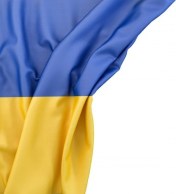 August 28, 2022. In May, researchers at the Information Centre at the Canadian War Cemetery in Holten, The Netherlands honoured 27 soldiers of Ukrainian heritage that are buried in the cemetery.  Photos for 4 were missing and Pieter was asked if he could help.

….The 4 soldiers of Ukrainian heritage without photos ….

This posting is about John RUSNAK, who was born September 3, 1924 in Portage La Prairie, Manitoba, the son of George and Gladys (nee Gorich) Rusnak.  Both his parents had immigrated to Canada from Ukraine.

Mike Rusnak, John’s great-nephew, sent photos and an excerpt from their family history record, as prepared by Mike’s late wife Karen.  “…John grew up on a farm in rural Manitoba (near Curtis) and attended the Curtis school.  He left school in 1939 after completing grade 8 as he was needed to help on the family’s 125 acre farm (100 acres cleared and under cultivation) as well as help on his brothers’ farms.  Tractors and horses were being used on the family farm.  He had considerable experience repairing tractors and trucks.  John liked driving trucks and had purchased a truck before enlisting in the army….” 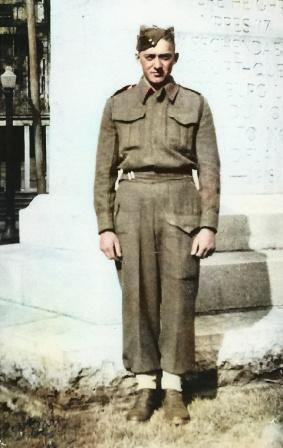 ….John enlisted twice in the army ….

John enlisted on November 18, 1943 with the No 10 District Depot in Winnipeg, Manitoba. His Occupational History Form noted that he spoke both English and Ukrainian.

The family history record included excerpts from the Personnel Selection Record, saying that “…John was a quiet person who took a normal interest in the social events of the community.  He liked to play the odd game of pool or snooker with friends.  He also played baseball and liked hunting – especially deer – but was not a good shot…. He wore glasses...”

His Medical Examination and Certificate form recorded that John had been previously rejected for active military service on June 30, 1942 in Portage La Prairie, at the 100th Basic Training Camp – due to poor vision.  His eyesight hadn’t improved, but this time he was accepted.

On December 7, 1943, he was transferred to the A21 Canadian Ordnance Corps Training Centre (COCTC) in Barriefield, Ontario, located on what is now called Canadian Forces Base Kingston. Duties related to ordnance included supplying, storing, and distributing a variety of items for the field Army, including ammunition, artillery pieces, and vehicles.

On April 24, 1944 John was reallocated for motorcycle training, receiving a Class III qualification for motorcycles on August 8, 1944. On October 17, 1944 an assessment deemed him unsuitable as a motorcyclist and it was recommended he be reallocated to general ordnance duties.

..John’s family wanted him discharged to help on the farm…

John’s family petitioned the government to have him discharged and returned home to help on the farm.  The family history summarized it as follows:

“…During August and October 1944 his sister Mary wrote letter to National Defence (Army), on behalf of her parents, requesting that John be discharged as he was needed on the farm.  Correspondence from the Army states ‘It is the soldier himself who must write the letter to his Commanding Officer if he wishes to apply for discharge from the Service.’ It does not appear that he did so as in October 1945 John wrote to his brother Roger and says ‘he hopes that Roger will be able to see the folks and see what they can do’ (about his discharge). He also says he was in hospital for a while.  John was looking forward to returning home and having a party to celebrate….”

No letters are in John’s service file to indicate that he requested a discharge. His army service continued.

On October 28, 1944 he was sent to the Canadian Army Transit Camp in Windsor, Ontario in preparation for overseas service.  John left Canada on November 24, 1944, and arrived in the United Kingdom on December 6, 1944, where he was assigned to the Canadian Ordnance and Mechanical Engineer Reinforcement Unit (COMERU).

On February 28, 1945 John passed another drivers course, and by March 15, 1945 he was transferred to the Royal Canadian Ordnance Corps (RCOC). (See https://www.canadiansoldiers.com/organization/unitlistingbycorps/rcocorbat.htm)

He was sent to northwest Europe on March 12, 1945 and a few days later transferred to HQ2 Canadian Corps Ordnance Field Park (CCOFP), which serviced the needs of infantry battalions.

On August 18, 1945 he was attached to No. 4 Canadian Public Relations Group, Canadian Army Occupation Force (CAOF) as a despatch motorcycle rider.

….John died in a motorcycle accident in Germany ….

On November 19, 1945, John was returning from the port at Wilhelmshaven in Germany, carrying ADLS despatches (Air Despatch Letter Service) from HMS Rupert to Augustfehn.  At around 2:30 pm, he was on the road between Zetel and Neuenburg, when his Harley Davidson motorcycle accidentally collided with a horse drawn wagon.

Two eyewitnesses came forward, Sgt Terpetra of the Dutch Army, but who was attached to the CAOF, and German civilian Georg Meyer of Zetel.

Mr Meyer’s report stated that as he was driving from Zetel to Neunburg, “… somebody was driving with a horse drawn wagon loaded with cattle about 150 to 100 metres ahead of me.  He was driving on the right hand side of the road with the right wheels running on the verge.  A despatch rider of the Occupation Troops overtook and passed me, turned to the right of the road, and seemingly heard a rattle in some part of his motorcycle.  This he tried to remedy by banging the side of the motorcycle with his right hand….”

The momentary distraction was fatal.  “… As he lifted his eyes again he sighted the wagon which was travelling in front of him. He quickly tried to bypass him on the left, but the distance between him and the wagon was too short so that he hit the wagon with his front wheel on the left hand side of the wagon. He hit the wagon box with his right side of his head….”

Mr Meyer stopped and lifted the motorcycle from John’s body, then rushed to a nearby house for help.  John was taken to hospital but died of his injuries on November 22, 1945.

…John was buried in Germany and then later in The Netherlands….

John was initially buried on November 26, 1945 in the Canadian Temporary Cemetery at Osterscheps, Germany.  The following year, he was reburied in the Canadian War Cemetery in Holten, The Netherlands. 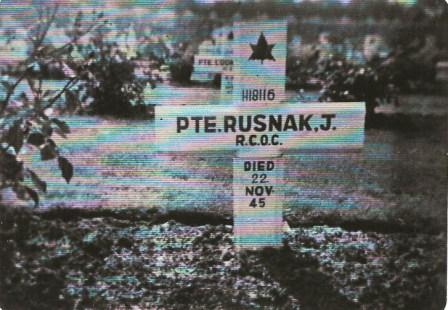 ….Rusnak Lake in northern Manitoba named in his honour…..

Rusnak Lake in northern Manitoba was named after John in 1978.

Thank you to Mike Rusnak for providing a photo of his uncle, and to Judie Klassen for finding newspaper articles and the reference to Lake Rusnak.  Our final story about a soldier of Ukrainian descent who is buried in the Canadian War Cemetery in Holten will be in the next posting.

If you have a story to tell, please let Pieter know. Email him at memorialtrail@gmail.com, comment on the blog, or tweet to @researchmemori1.

…Missed the previous postings about the soldiers of Ukrainian heritage?…

One thought on “On The War Memorial Trail….. The WWII Despatch Rider From Portage La Prairie Who Lost His Life In An Accident In Germany”