April 17, 2022.  In September 2017, Pieter and I visited the village of Posterenk in The Netherlands with Edwin van der Wolf.  Edwin told us how the Carleton and York Regiment came from Italy to Marseilles, France, and then made their way to The Netherlands.  On April 13, 1945, they liberated Posterenk.  In the process several soldiers lost their lives and were temporarily buried in the vicinity.

The village never forgot the sacrifices and placed a memorial stone on its windmill.

Translation of memorial stone on the windmill: Posterenk freed by the Carleton & York Regiment of Canada on April 13, 1945. (Photo credit: Daria Valkenburg)

…8 known soldiers who lost their lives in the liberation of Posterenk….

The village also prepared a list of 6 Carleton & York Regiment soldiers, who had been buried in the area, to commemorate.  Unfortunately, not all soldiers who died were included. 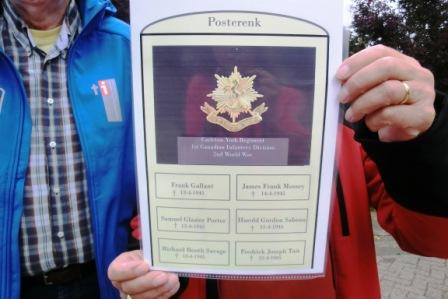 …Sacrifice of Goldwin Pollick and Daniel MacKenzie commemorated in 2022….

On April 13, 2022, the commemoration of the 6 soldiers of the Carleton & York Regiment who had been buried near Posterenk was held.  This year, Edwin “….read out for the first time the stories of Pte Goldwin Pollick and Cpl Daniel MacKenzie of this regiment, who were temporarily buried in Lochem because they had previously died in a Canadian hospital there….” 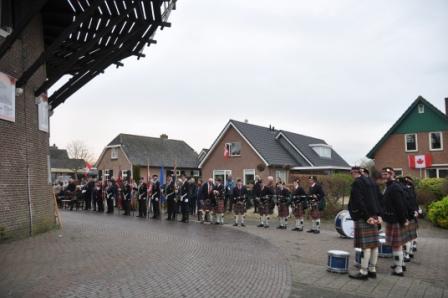 Members of the Royal Canadian Legion in The Netherlands and the City of Apeldoorn Pipes and Drums Band joined officials and the public for the commemoration event in Posterenk.  (Photo submitted by Edwin van der Wolf. Photo credit: Anneke Poppenk) 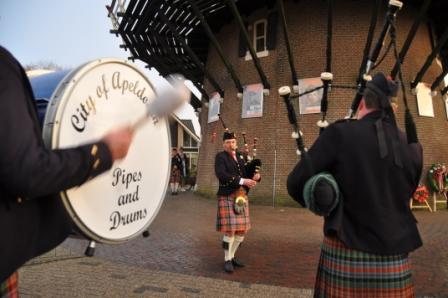 …Two soldiers commemorated in Posterenk are without photos….

Edwin advised that photos of the soldiers have been hung on the Posterenk windmill, but photos of two soldiers have yet to be found.  He has asked for help to “…look for the two missing photos of Pte James Mossey and Sgt Harold Sabean for the working group in Posterenk...”  Both men are buried in the Canadian War Cemetery in Holten, The Netherlands.

Thank you to Edwin van der Wolf for sharing photos about the commemoration event in Posterenk. If you have photos or information to share, please let Pieter know. Email him at memorialtrail@gmail.com, comment on the blog, or tweet to @researchmemori1.

April 16, 2022.  I always joke with my friends that if there is a war memorial or a military cemetery in an area, Pieter will find it.  So, I guess I shouldn’t have been surprised this winter when we were in Florida and a fellow snowbird, retired US Army veteran Rick Greiner called and asked if Pieter wanted to visit the nearby site where American replicas of a WW2 era German V1 rocket were test-fired!  (For information on V1 rockets, see https://en.wikipedia.org/wiki/V-1_flying_bomb or  https://en.wikipedia.org/wiki/V-weapons) 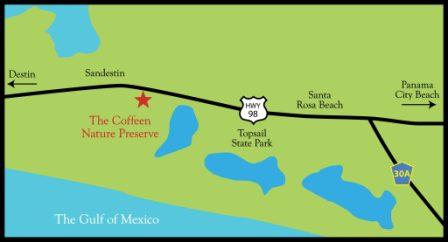 Pieter and I were both surprised.  We’d visited this part of Florida for over a dozen years and had no idea that a missile testing site was in the vicinity, located in the Coffeen Nature Preserve on Hwy 98 in Santa Rosa Beach, 17.7 km (11 miles) east of Destin. (See https://waltonoutdoors.com/military-relics-land-conservation-cohabitate-at-coffeen-nature-preserve/)

Rick explained that he’d been interested in WWII since childhood. “…My father served on 3 US Navy destroyers. He saw action from German 109 planes, submarines, artillery fire at Anzio, and Japanese kamikazes over Okinawa.  He was in the Panama Canal heading to Japan when the atomic bombs were dropped….”

This led to Rick’s lifelong interest in the history of rocketry and atomic bombs.  “…The areas that I studied were British code breaking with Alan Turing at Bletchley Park (been there), the making of the atomic bomb at Oakridge TN, Hanford WA, and Los Alamos, New Mexico where the gadget was assembled (been there).  In 1957 my mother picked me up from school and said the world changed today- the USSR sent a rocket into space.  The space race began.  Rockets had been around for many years, but the Germans under Werner von Braun perfected them with the V1 and V2 rockets….”

The V in the German rockets stood for Vergeltung (Vengeance). How did a V1 end up in the USA, we wondered?   In June 1944, Germany bombarded England with the V1s. In July 1944, parts salvaged by the Polish underground and recovered from crashed but unexploded bombs in England, were flown to Wright-Patterson Field in Ohio.

The remains were stripped apart and within three weeks copied to produce an American version, the JB-2.  This operational guided missile was the predecessor of the modern cruise missile. 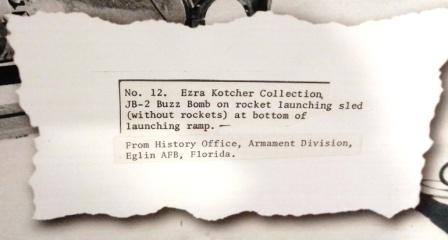 Explanation of display photo of JB-2.

Over 600 of the replica bombs were sent to nearby Eglin Air Force Base and then test-fired from a missile launch ramp at the Coffeen Nature Preserve.  Two of those missile launch ramps and associated bunkers still exist.  (See https://en.wikipedia.org/wiki/Santa_Rosa_Island_Range_Complex)

Rick said that “… Around 4 years ago I read an article in the paper about 4 Mile Village’s rocket test site remains.  I called the phone number and received no call backs, the next year we had a lot of rain and every time a date for a tour was made, it was cancelled.  The same for the next year.  Last year was Covid so we did not go to Florida…” (See https://www.browsedestin.com/blog/four-mile-village-miramar-beach-a-step-back-in-time.html)

This year Rick was determined to visit the site.  Pieter was a bit cautious given the prevalence of Covid, but safety precautions were made and a group of veterans visited the site.  Joining Rick and Pieter, a Dutch Air Force veteran, were retired US Marine Bob Young, retired US Navy veteran Dick Becker, retired US Army veteran Dr Ed Grayden, and Rick’s wife Mary Ann.

…Fishermen retrieved rockets that had been test-fired….

Their tour guide was Susan, who “… met us in one of the WW2 buildings for a lecture on the rocket and how the US military got some pieces/parts of the rockets and built one from scratch.  Lots of errors, explosions, and, finally, takeoff.  The rockets were sent down a 100 yard rail ramp, flew into the gulf, and Destin fishermen were hired to retrieve them for reuse…”

The Destin fishermen were especially brave given this cautionary sign at a dock at Lake Fuller in the Preserve!

“…The site became known as Range C64 and it was the start of the US strategic missile program….”

Rick summarized the visit by explaining that “…At the site one can walk down one of the ramps and go into a heavy concrete observation bunker.  The main part of the 240 acre Preserve has trails to hike and enjoy the wildlife and plants.  Our group had a wonderful afternoon of learning and experiencing the nature hidden from the houses, condos, and retail big box stores off Rte 98...”

If you are in the area and interested to see this piece of military for yourself, Rick advises that “…The tour is free but reservations are needed.  Call Susan at 850-622-3700.  It is across from Sandestin, and next to Tops’l Resort on Rte 98.  She gives tours on Monday, Wednesday and Friday afternoons.  A code is needed to get through the gate….”

Thank you to Rick Greiner for organizing this event which brought a piece of WW2 history to life. Pieter said that “… it was very thoughtful of Rick to include me in this trip….” Pieter went on to note that during the Nazi occupation of The Netherlands in WWII, “…a lot of V2s were launched from the west coast of The Netherlands towards London….”

Now that our winter holiday is over, research on Canadian soldiers continues.  If you have photos or information to share, please let Pieter know. Email him at memorialtrail@gmail.com, comment on the blog, or tweet to @researchmemori1.