March 15, 2019.  One of the biggest challenges in the project to uncover the stories behind the names listed on the Cenotaph outside the Borden-Carleton Legion is finding photos of the men.  Quite often family members can be found, but photos, especially for soldiers who lost their lives in WW1, were not always kept by family.   Most of the soldiers who lost their lives were young and unmarried, and succeeding generations of nieces and nephews didn’t always want to keep what was left behind by grandparents or their parents.  Photos, particularly unidentified ones, and letters from unknown people were just not a priority for many people.

So it was a very pleasant surprise when, during a visit to the PEI Archives in Charlottetown, Pieter struck it lucky while looking through an album of photos donated by Jean MacFayden.  Most photos were not identified, but then, to his astonishment, Pieter found a photo of WW1 soldier John Goodwill HOWATT, of Augustine Cove.  Unfortunately, the other two men in the photo were unidentified, with only the remark that they were ‘two Halifax boys’. Up to now, Pieter has not been able to find anyone else who might have the same photo and be able to give more information.

Photo donated to the PEI Archives by Jean MacFayden, in which she identified John Goodwill Howatt on the left, and noted only that he was with “two Halifax boys”. (Photo credit: courtesy Public Archives and Records Office of Prince Edward Island, Acc4154)”

In this exceptional case, Pieter had a photo, which could put a face to a name, but was unable to find any family, a bit unusual given that Howatt is a well-known Island name!  Who was this mystery man?

John Goodwill HOWATT was born July 27, 1897 in Augustine Cove, the son of Edward G. Howatt and Emma May Wood, and had a younger sister, Cecilia Amanda.  After Howatt’s father died in 1908, his mother remarried, to Don Howatt in 1909, but she herself died on August 25, 1916.

A farmer before he decided to enlist in January 1916 with the 105th Battalion, Company C, Howatt had his medical exam in Summerside, but it wasn’t until March 4, 1916 that he received his medical clearance and was formally enlisted.  After that, things moved quickly, and he was on his way to England in June 1916, sailing from Halifax aboard the S.S. Empress of Britain.  On November 28, 1916 he was transferred to the 25th Battalion of the Canadian Infantry and sent to France, arriving there on November 29, 1916.

On August 8, 1918, the Battle of Amiens began in France, the start of the 100 Days Offensive that led to the end of WW1.  By the end the day, Allied Forces had forced their way through German lines around the Somme. There were 27,000 German casualties, 12,000 of which had surrendered.

The next day, August 9, the war diary of the 25th Battalion recorded that, “At 9:15 am, verbal orders were received for the Battalion to continue the attack in conjunction with other troops.”  After leaving Gaillacourt, where they had spent the night, “The Battalion rapidly moved to the assembly position – the heights southeast of Caix – and crossed the British front line, then held by the 4th Canadian Division, at 1 pm. As the Battalion moved over the ridge in front of Caix, they were met with a light artillery barrage, and strong enemy machine gun fire.”

As they pressed on towards Vrely, the Battalion encountered “some hard fighting in a wood on the right”.  Undaunted, the Battalion continued on and the war diary gave an understated report of what happened next.  “On emerging from Vrely, ‘A’, ‘B’, and ‘C’ companies met with some opposition in the nature of an enemy Field Battery, which opened fire from a few hundred yards away.” The Battalion won this skirmish.  “Rifle and machine gun fire caused this Battery to retire, with the loss of its officers and three of its drivers, and the advance continued to Meharicourt, which was captured with little trouble by 5 pm.”

It’s not certain exactly when, but at some point on the second day of the battle, Howatt was severely wounded in his back and shoulder from gunshot, leaving him paralyzed from the waist down.  He was carried to a Casualty Clearing Station, then put on a train the next day to a field hospital.  On August 22, he was transported back to England and operated on, but died in a London hospital on September 7, 1918. He was only 21 years old.  He’s buried at Brookwood Military Cemetery in Surrey, England, which we have not yet been able to visit.

If you have more information or photos on John Goodwill Howatt, or are able to identify the two ‘boys from Halifax’ in the photo shown above, please send an email to dariadv@yahoo.ca or comment on this blog.

March 9, 2019.  In the course of his research into the names on the Cenotaph outside the Borden-Carleton Legion, sometimes Pieter is approached for help in solving mysteries that are unrelated to the project.  While he helps when he can, sometimes he gets stumped.

One of these unsolved mysteries concerns a chest that once had belonged to a Sgt. Ross and is now owned by retired Reverend Adrian Auret, a former Minster at the Presbyterian Church in Burnside (Clyde River). Reverend Auret explained that the chest was left behind in a barn at the Presbytery. He had stored it in the garage to protect it, and when he moved to another church in New Brunswick, the chest was packed by the movers and sent with his belongings.  Now he wondered if Pieter could find out if the chest belonged to someone or if it was a yard sale purchase from a previous minister and then left behind as unneeded baggage. 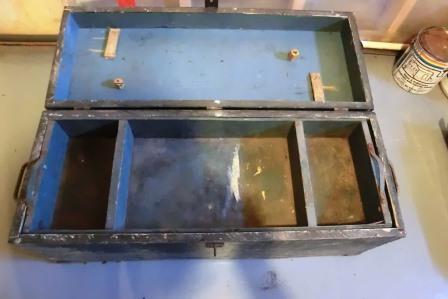 What the chest looks like when opened. (Photo credit: Pieter Valkenburg)

Outside of the name on the chest, there were no other identifying marks, such as a date or military unit. Pieter guessed that the initials H.S. after the name Ross indicated the initials for the first names of Ross, rather than a rank or unit.  It was wooden and quite large, definitely not a contemporary object.  Perhaps it had been used on a ship or was strapped to a wagon during the horse and buggy days?

Pieter thought it best to start with the church itself.  He contacted the Head Office of the Presbyterian Church in Summerside and was incorrectly told that no one with that name served at the church in Clyde River.  However, in a 1993 book written by William and Elizabeth Glen, “BONSHAW:  A Stroll Through The Past”, mention was made of a William Ross, who had been ordained in 1860.  Could the chest be from the 19th century?  He contacted the Glens, but unfortunately they had no information other than what was in the book.

He searched military records for someone with that name and found a Cpl S.H. Ross who attended Infantry School in Fredericton, N.B. in 1885.  Could this be the same Ross?  It was inconclusive without more information about the chest itself.

Pieter then contacted the Military History Research Centre at the Canadian War Museum, and reached out to several people on Facebook who dealt with military insignia, and military museums. Perhaps the hinges on the chest could help date it?

The general consensus by everyone, including an archivist at the Canadian War Museum, seemed to be that the chest could be a trunk from WW II.  Three theories about the use of the chest were that it may have been used in a footlocker in a barracks, was used by a member of the Home Guards, or was used by a military instructor for holding instructional tools and materials.

Ross was identified by one person as an Island name, so it seemed reasonable to assume that it belonged to someone from the Island.  As was confirmed by the Canadian War Museum, it was not possible to look for a Sgt. Ross who served in WWII as the service files for the Second World War are still under privacy legislation. The Army Lists also only list officers, and so a Sgt. Ross would not appear.

Can you help Pieter solve this mystery? If you think you might be able to identify the period of the chest, or the identity of Sgt. Ross, please send him an email at dariadv@yahoo.ca or comment on this blog.