June 5, 2022. After seeing Pieter on the news during Remembrance Week 2021, Sylvia Churchill of Nova Scotia contacted us.  “… My husband’s father, Bruce W. Churchill, was killed in Hulst, The Netherlands, buried there, and later exhumed after the war was over and buried in the Adegem Canadian War Cemetery.  He was killed in a garden near a Monastery while their Regiment was cleaning their Bren guns. He died instantly, on September 29, 1944.  My husband was born January 1945 and named after his father, Bruce W. Churchill (Jr). …”  (See https://onthewarmemorialtrail.com/2021/11/15/on-the-war-memorial-trail-ctvs-atlantic-live-at-5-update-on-the-photo-search-for-soldiers-buried-in-the-netherlands/)

Bruce Wilbur CHURCHILL was born April 17, 1921 in Sandford, Yarmouth County, Nova Scotia, the son of Ralph Lloyd and Ethel Mae Churchill.  He had 5 brothers and 6 sisters, and worked as a farm labourer and fisherman after leaving school at the age of 16.

When he enlisted in Yarmouth, Nova Scotia on October 10, 1939 with the 6th Anti-Aircraft Battery,  not only were 4 of his brothers in the Army, but also his father, who was a gunner.

Bruce’s service file noted that he played volleyball and swam, and liked to read popular magazines and novels.

On November 1, 1941, Bruce was transferred to the 1st Anti-Aircraft Search Light Battery as a member of the search light crew, all the time remaining in Canada, understandable given that 5 members of his family were already serving.  He had been a cook since April 11, 1940 and held the rank of Gunner.

He married Dora Mae Goodwin on February 14, 1942, and they became the parents of a daughter, Donna Fay, born in Argyle Sound, Nova Scotia on September 3, 1942.

…Bruce was anxious to serve overseas…

In an August 4, 1943 interview with the Personnel Selection Board of the Army, it was noted that Bruce was “…anxious to see action in an active theatre of war.  For this purpose he has volunteered for the parachute battalion…”

Bruce didn’t meet the requirements for the parachute battalion, but was considered suitable for the artillery.

On February 14, 1944, Bruce and Dora Mae’s son Eric Bruce was born in Argyle Sound, but sadly he passed away on May 28, 1944.  May 28 is the same day that Bruce’s desire for overseas service was about to be granted, as he was transferred to the Canadian Infantry Training Centre (CITC) in Aldershot, Nova Scotia.

He was on his way to England as of August 3, 1944, arriving on August 10, and at his request, he changed from cook to general duty as of August 21, 1944.  He became part of the Canadian Infantry Reinforcement Unit (CIRU) and sent to France on September 4, 1944.

…Bruce lost his life when a gun ricocheted…

On September 15, 1944 he was transferred to the Algonquin Regiment. On September 29, 1944, he lost his life in Hulst, The Netherlands, accidentally killed when a Bren gun ricocheted. 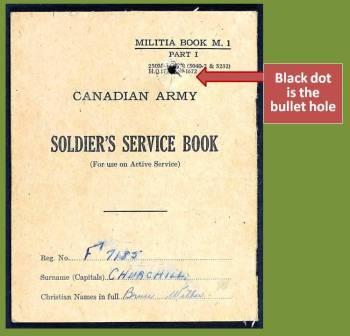 Among the documents that Sylvia shared was “…the first page of Bruce Churchill Sr.’s Soldier’s Service Book. I want to point out the bullet hole in that book (which is on all the other pages) ….he obviously was wearing that when he died. How sad to see that….”

When Bruce died, his wife Dora Mae was pregnant with their son Bruce, who was born in January 1945.

An account of the incident was recorded by George E. Spittael of Belgium in his book ‘Librera Me’, published in 1989 in Flemish.  By September 27, 1944, several companies were given a rest period in Hulst while others patrolled the shoreline of the Scheldt.

A translated excerpt from September 29, 1944 explained what happened to Bruce.  “…Although there was no enemy activity in Hulst, there were two casualties when a Bren gun ricocheted. Pte. Poole was wounded and Pte. Bruce Wilbur Churchill, F/7185, killed. The 27-year-old Canadian from Yarmouth, Nova Scotia, was temporarily buried in Hulst General Cemetery, but after the hostilities his remains were transferred to Adegem…”

…. A letter from the Chaplain….

In a November 19, 1944 letter from Canadian Army Chaplain, Honorary Captain A. Phillips Silcox to Bruce’s parents, he described what happened on the day Bruce lost his life:

“…a small group of soldiers were sitting in a garden, cleaning weapons, or taking them apart and reassembling them, when in some way a single shot was most unexpectedly fired from a Bren Gun close to Bruce.  He was instantly killed as the bullet passed through his body.  It then continued through a hedge and lodged in another soldier’s leg – though fortunately he was not seriously wounded…..

Our location at the time was in a small town in Holland not far from the border of Belgium, but well away from the enemy and we felt fairly secure for a few days rest.  The garden was the most unlikely place to expect death – a lovely spot, across from a Roman Catholic monastery….

The Father Superior of the Monastery (where I was staying) offered a pleasant corner of their garden for the grave, so there we laid him to rest while his Company stood ground, a few of the priests and a civilian woman looking on, for the brief military service.  Afterward the soldiers who completed the grave laid a lovely spray of flowers and I know that the priests will care for it until the day that our government agents transfer all graves to certain central cemeteries….”

…Sylvia and Bruce Churchill visited the grave of his father…

Sylvia explained that “…in 2019, Bruce and I were fortunate to have visited Belgium and The Netherlands for two weeks, and we were able to visit his father’s gravesite for the first time….”

Bruce Churchill at his father’s grave in the Canadian War Cemetery in Adegem in 2019.  (Photo courtesy of Bruce (Jr) and Sylvia Churchill)

In addition to the visit to the Canadian War Cemetery in Adegem, Belgium, Sylvia explained that “…when we went to Belgium/Netherlands, in particular to the town of Hulst, we went to the Town Hall and spoke to a historian. Prior to our visit to Europe, we had mailed him everything we had as far as finding the grounds where Bruce’s father had originally been buried, and they gave us a location where an old Monastery used to be. It is a school now. …”

The former Monastery in Hulst, The Netherlands, and the tree that jogged a memory.  (Photo courtesy of Bruce (Jr) and Sylvia Churchill)

The visit to Hulst brought back a memory of an old photo Bruce remembered seeing.  “…There was a huge tree that jogged Bruce’s memory of his Mother showing him a picture of his dad sitting on a tree (which was small then but low lying).  That particular photo is lost. I’ve attached a picture I took of that tree when we were in Hulst….” 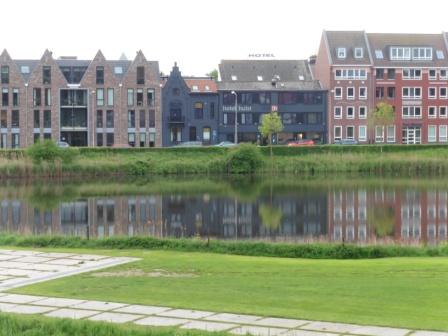 A view of Hulst. (Photo courtesy of Bruce (Jr) and Sylvia Churchill)

Sylvia noted that “…Bruce felt a connection with Hulst, perhaps because he knew that is where his Father died. It was so peaceful and beautiful. …”

Thank you to Sylvia and Bruce Churchill for sharing photos and information on Bruce’s father, and their own memorial journey. Do you have more information to share? Email Pieter at memorialtrail@gmail.com, comment on the blog, or tweet to @researchmemori1.

2 thoughts on “On The War Memorial Trail….. The WW2 Soldier Who Lost His Life In A Monastery Garden”