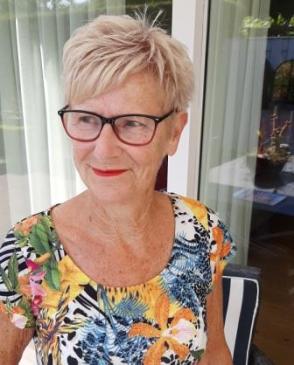 June 2, 2022.  When Pieter begins a research project into a soldier from either WWI or WWII, it’s usually because it’s a soldier on a list.  Sometimes a photo is missing, or a soldier participated in a particular battle, or was in a specific regiment.  In each case, the name of the soldier and a few particulars about the military service are known.

So we were intrigued when Pieter received an email from Adje van der Sanden-van Lisdonk in The Netherlands.  She contacted him after reading an article which translated to ‘Quest For Faces’ in the Dutch newspaper De Telegraaf on May 4, 2022. (See https://onthewarmemorialtrail.com/2022/05/04/article-in-de-telegraaf-quest-for-faces-zoektocht-naar-gezichten/)

…A photo and Christmas cards were found….

Adje had a photo of a WWII soldier from Canada, and two Christmas cards.  All had been found in her parents’ house and she wanted to return them to the soldier’s family.  The challenge Pieter faced was that she knew nothing about the soldier or family.

In a translated excerpt of her email, Adje wrote “….In the house of my deceased parents, Toon and Marie van Lisdonk-Nooten, we found Christmas cards, a one-dollar bill, and a photo of the soldier Wilfred with his baby sister. In 1944 he stayed in Gilze Rijen, Holland, near my parents.

I would like to send this to the relevant family and I wonder whether the soldier survived the terrible war and whether he returned home to Canada.

I read the article about you in De Telegraaf today. Then I googled and that’s how I found your wife’s email address. I have a lot of admiration for both of you. Today is the Commemoration Of The Dead here and the flag is now at half mast….”

…The photo gave a clue to the soldier’s identity… 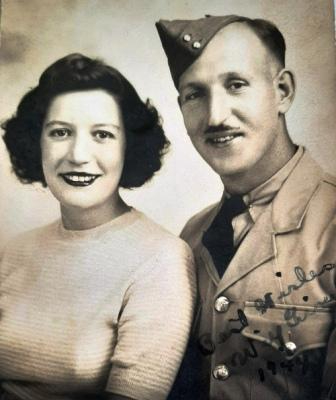 Photo found in the house of Adje’s parents. The front of the photo reads ‘Best Wishes Wilf Giroux December 1944’.  On the back was written ‘my baby sister and myself’. (Photo submitted by Adje van der Sanden-van Lisdonk)

The photo that Adje submitted was signed ‘Best Wishes Wilf Giroux December 1944’ and on the back was written ‘my baby sister and myself’.

We had our first clue – the soldier’s name – Wilfred GIROUX.  Gilze Rijen has a large air base, and at first we thought he might have been in the Air Force.  However, it appears that he is wearing an Army uniform, and likely the photo was taken in Canada before he was posted overseas.

Gilze Rijen was liberated at the end of October 1944, and Allied troops were stationed there for about two months.  It may be that Wilfred was part of a maintenance or mechanical regiment.

The photo inscription suggested that it was given to Adje’s parents, so Pieter asked her if she knew how Wilfred could have met her parents.

Adje replied that “…He was quartered diagonally with several soldiers across the road from my parents. Opposite was a cafe so my father, who enjoyed a beer, may have met him there. My father was a very social person….”

With a name uncovered, the Canadian Virtual War Memorial database was consulted.  No Wilfred Giroux, which suggested that he had survived the war.  We were no further ahead in determining where he came from, which regiment he served in, or what happened to him.  We then looked for clues in the Christmas cards.

…The Christmas cards led to clues about Wilfred’s family…

Two Christmas cards, written by Wilfred’s sisters, provided more clues.   One card, written by his sister Peggy, read “…I know that there will be nothing around you to remind you of Christmas, so I am sending you this Christmas tree – just imagine you are sitting in front of it in our living room…” (The card had an image of a tree, along with the names Dada, Dot, Katie, Peggy, Toady, and Addie.)

“… Next year we will have one just like it and with you here it will be just as if Santa Claus has come to us once again….

Try and forget about this Christmas and just keep thinking of next.

Loads of love and the very best of luck at Christmas and all through next year.  Peggy…”

The second card, dated December 1, 1944, was written by Toady and read: “…Dear Wilfred, Things are shaping up for a white Christmas here, it has been snowing all day.  It’s the kind of weather that is bad for straight hair. My permanent is grown out and I have to put it up every night…..

We are all fine and will remember you in our Communions at Christmas.  Love Toady…”

Toady’s card indicated a family that was Catholic and that they lived in an area where winter came early.

The name Toady was unusual and was the clue that unlocked the mystery of who Wilfred Giroux was.  I found an obituary for Marie Antoinette ‘Toady’ Giroux, who died in Oshawa, Ontario on August 30, 2014, the last surviving sibling of eleven.

If there had been any doubt that this was the same Toady as in the Christmas card, it was dispelled when the obituary mentioned that Toady and her sisters Katie, Peggy, and Dot raised two nephews – Butch Mann and Archbishop Anthony Meagher. Unfortunately the sisters and the nephews were also deceased. (See obituary: https://www.dignitymemorial.com/obituaries/oshawa-on/marie-giroux-6104629)

I called the funeral home, and they checked, but the contact number for the person who arranged the funeral was no longer in service.  A call to a woman who had left a condolence message led to the information that her mother had lived across the road from the Giroux family in Whitby, Ontario.

… Pieter finds the birthplace of Wilfred… 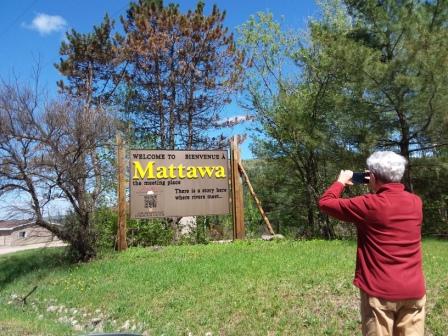 With the names of Wilfred’s sisters and the locations of Oshawa and Whitby gave Pieter enough information to find Wilfred’s family.  His father was a railway contractor, and was posted in various locations.

Wilfred Octave Joseph GIROUX, the son of Octave Joseph and Elizabeth Ellen (nee Hickey) Giroux was born September 25, 1912 in Mattawa, Ontario, a place we had a chance to drive through on a recent trip to North Bay.

A search through newspapers available online did not turn up any information on Wilfred, but Judie Klassen was able to find the names of two of Wilfred’s brothers:

Wilfred did survive WWII and moved to Toronto, where he was listed as a mechanic in a 1974 voters list.  He was still alive when his brother Jim passed away on December 10, 1977.

Still unanswered are the following:

Thank you to Judie Klassen and Shawn Rainville for their assistance in uncovering family members and where Wilfred settled post WWII. Thank you also to Don Smith for researching the uniform that Wilfred is wearing to help assess whether it was an Air Force or Army uniform.

We very much appreciate the care that Adje van der Sanden-van Lisdonk took to preserve these cards and photo, and for wishing to return them to Wilfred’s family.  Can you help with information on Wilfred Giroux or his family members?  Email Pieter at memorialtrail@gmail.com, comment on the blog, or tweet to @researchmemori1.

3 thoughts on “On The War Memorial Trail….. The Search For Wilfred Giroux”