“No soldier buried overseas should be forgotten.”

January 7, 2021.  “No soldier buried overseas should be forgotten.” This statement by Pieter in a news clip on CTV’s Atlantic Live At 5 touched many people who watched it, and many photos and stories were subsequently emailed to him.   Since the broadcast, Pieter has been working to ensure every email is acknowledged, and that the photos of soldiers buried in The Netherlands are forwarded to the appropriate cemetery for their digital archives.  (See https://bordencarletonresearchproject.wordpress.com/2021/01/05/on-the-war-memorial-trail-the-search-for-ww2-soldiers-buried-in-the-netherlands-featured-on-ctvs-atlantic-live-at-5/)

This posting will feature some of the photos submitted. There were too many submissions for one posting so more will be featured in subsequent postings.

Soldiers buried at the Canadian War Cemetery in Holten, The Netherlands 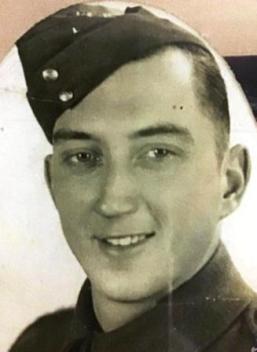 Brenda Budd submitted a photo of James Grant ANNINGSON, saying “…My husband’s uncle is buried there.  His name was James Grant Anningson but the family called him Grant.  He was the only one in the family that didn’t return…”  Sgt Anningson was with the New Brunswick Rangers and lost his life on April 27, 1945, at the age of 23. 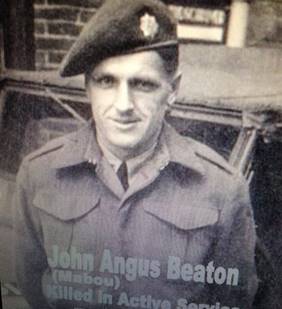 Alexander Beaton submitted a photo of his uncle John Angus BEATON from Mabou Ridge, Cape Breton, Nova Scotia.  Alexander’s brother Daniel wrote that his uncle “… made it through the war but due to the amount of soldiers that had to return to Canada, he and other soldiers were waiting their turn to be flown home.  While waiting one Sunday morning in January 1946, He was fatally shot by a Canadian soldier suffering from a mental illness. This soldier was later charged with his murder…”

The shooting occurred in Oldenburg, Germany, where there was a large Canadian base.  Daniel continued by telling us that “…I was told that John Angus’s parents, my grandparents, were happy and waiting for John Angus to return home, but were informed later that he would never return. He was 32 years old when he died, and was the son of Mary and Alex Tailor Beaton…”

Phyllis Kelly submitted a photo of her uncle, Melvin COLLINS, from South Kouchibouguac, New Brunswick.  He served with the New Brunswick Rangers and died on April 12, 1945 in Papenburg, Germany, age 26, when he accidentally tripped a hidden high-incendiary booby trap.

Goldwin Marven Pollick pushing his brother Ralph on a bike. (Photo courtesy of Gary Pollick and Family of Goldwin Pollick)

On behalf of the Goldwin Pollick family, Gary Pollick submitted a photo of his uncle, Goldwin Marven POLLICK, and explained that “…We remember him as always being referred to as Goldy.  I don’t know a lot about him as I was not born yet and no one in my family spoke much about the war.  My father was in The Netherlands at the same time, and he was able to view his brother’s body before it was taken away for burial…”

Goldwin Pollick was born in Minto, New Brunswick, and served with the Carleton and York Regiment.  He lost his life on April 13, 1945 in Wilp-Achterhoek. This date was familiar to us as in 2017 we visited a windmill in the nearby village of Posterenk, in which 6 members of the Carlton and York Regiment are listed as having died between April 13 and 15.  Unfortunately, this listing does not include every soldier who was killed in the area.

Dawn (Spidle) Coldwell submitted a photo of her uncle, Ford Hilton SPIDLE, explaining that “…He was a member of the Cape Breton Highlanders. I’ve been told that he was killed by a sniper bullet the day the war was declared over. He was the young age of 32.  Apparently, the information hadn’t been received that the war was over….” The war in The Netherlands ended on May 5 and Ford Hilton died on May 1, 1945 during the Battle of the Delfzijl Pocket, which lasted from April 23 to May 2.  20 soldiers from the Cape Breton Highlanders were killed in action during that battle.

Dawn went on to share a personal experience.  “…I was fortunate enough to have attended the Memorial Day Service in Holten, in 2009. While I was there the Dutch people treated me like I was royalty. I have stayed in close contact with the people over there who made my trip possible. Uncle Ford was my Dad’s only brother. I have a brother who was named after Uncle Ford.  I wasn’t even born when Uncle Ford was killed but my Dad always kept his memory alive.…” 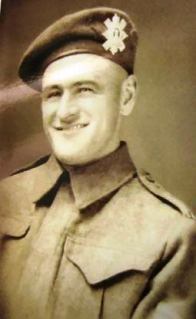 Gary Richard Perry of Nova Scotia submitted a photo of Charles Borden TUPLIN of the Black Watch (Royal Highland Regiment), and explained that “…My maternal grandfather Charles Borden Tuplin of Indian River, PEI is buried at Holten. He was shot on December 7, 1944, was taken as a POW but died the next day…”

Soldiers buried at the Canadian War Cemetery in Groesbeek, The Netherlands

Phyllis Kelly submitted a photo of William Francis STEWART on behalf of the Stewart family, and explained that “…He was born in Claire Fontaine, New Brunswick (this community doesn’t exist now, it was expropriated and became part of Kouchibouguac National Park.) He was the son of John and Katherine (Butler) Stewart. He was married to Audrey Savoie and they had three daughters, Gloria, Bernetta, and Margaret. …”  He lost his life on July 8, 1945 when he fell out of a window in Amersfoort, The Netherlands in the early morning.

Jacqueline Inder submitted a photo of Benjamin James WITHERALL of Nova Scotia, and wrote that “…I would like to share with you the only picture my mother’s family had of their brother in uniform.  His name is Benjamin James Witherall who was a private with the Highland Light Infantry in WW2.  He was killed in action on December 27th, 1944 at the age of 20…”

The Highland Light Infantry was based on the front line on a ridge between Nijmegen and Arnhem during that time. (See https://pipesforfreedom.com/webtxt/0502THE_HIGHLAND_LIGHT_INFANTRY_OF_CANADA.htm)

Angela Leighton submitted a photo of Edison Reynolds SMITH, explaining that “…I wish to advise that my uncle, Private Edison Reynolds Smith of the North Nova Scotia Highlanders, Service #F/57514 (date of birth May 11, 1924) was killed in action in Holland on October 16, 1944, at the age of 20…” He lost his life during the Battle of the Scheldt and was initially buried in the province of Zeeland, The Netherlands.  (See https://www.veterans.gc.ca/eng/remembrance/history/second-world-war/scheldt) Angela ended her email with the statement: “…None of these heroes should ever be forgotten….”  She is correct!

Thank you to Alexander and Daniel Beaton, Brenda Budd, Dawn (Spidle) Coldwell, Jacqueline Inder, Phyllis Kelly, Angela Leighton, Gary Richard Perry, and Gary Pollick for sharing photos and anecdotes.  Thank you again to CTV’s Atlantic Live At 5 for helping to get the word out on this quest of remembrance. Atlantic Canadians remember their loved ones who are buried overseas.

More photos and stories in Atlantic Canada Remembers – Part 2! If you have photos or information to share, please email Pieter at dariadv@yahoo.ca, comment on the blog, or tweet to @researchmemori1.