March 6, 2022.  In 2017, we visited Manitoba Cemetery outside Caix, France, to place flags by the grave of WW1 soldier James CAIRNS of Kinkora, Prince Edward Island, who lost his life on August 9, 1918 during the Battle of Amiens. (See https://bordencarletonresearchproject.wordpress.com/2017/09/30/the-search-for-manitoba-cemetery/)

When we signed the Guest Register Book, we were astonished to find that the previous visitors had come to honour their great-uncle and great-great uncle Theodore (Ted) Francis ARSENAULT from Abrams Village, Prince Edward Island. 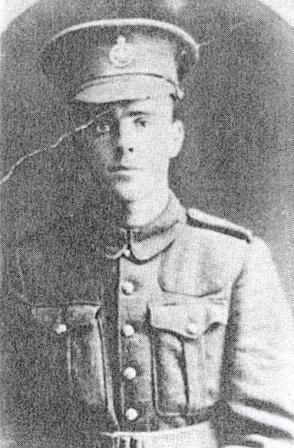 In November 2021 Colleen Arsenault shared a photo of her great-great-uncle, explaining that her mother and sister had signed the guest book in that far away cemetery. (See https://onthewarmemorialtrail.com/2021/11/10/on-the-war-memorial-trail-linking-the-past-with-the-present/)

…4 generations of the Arsenault family have served in the military….

Shortly after this, Stephen Arsenault sent us research on Ted Arsenault, and explained that 4 generations of his family served in the military.  “…Theodore and his brother Camille were both from Abrams Village. Further descriptions as follows: 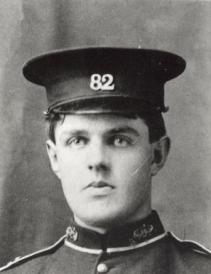 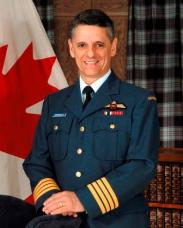 He went on to say that “…Interestingly, in my (limited) spare time, I am an Artillery Officer serving in the Primary Reserves with 1st (Halifax-Dartmouth) Field Artillery Regiment, RCA, which makes 4 consecutive generations of military service to Canada spanning over 100 years. …”

In June 1916, Ted travelled to Valcartier, Quebec with the Regiment for training prior to sailing to England from Halifax a month later aboard ‘Empress of Britain’.

…Previous stories of Islanders who were aboard the ‘Empress of Britain’ with Ted Arsenault….

Several Islanders, whose stories have previously been told, were on that same ship.  Among them were:

The ship docked in Liverpool, England on July 25, 1916.  The troops were sent to Shorncliffe and attached to the 1st Training Brigade.  They were later transferred to different training brigades in Surrey.

…Ted was gassed at Passchendaele….

In November 1916, Ted was sent to France as part of the 14th Battalion (Royal Montreal Regiment).  A year later, on November 5, 1917, during the Second Battle of Passchendaele in Belgium, Ted was poisoned by a mustard gas shell that exploded.  (For more information, see https://en.wikipedia.org/wiki/Second_Battle_of_Passchendaele)

He was invalided to England and sent to the King George Hospital in London for treatment. According to his medical file, he “…had a sore throat and loss of voice for a month…” and “…breathing was difficult at night…” until January 13, 1918.

From the hospital in London he was sent to Manor War Hospital, a convalescent facility in Epsom.  It wasn’t until March 4, 1918 that the medical staff declared his chest was clear, and he was discharged 4 days later.  On May 16, 1918 he returned to France and the 14th Battalion.

….The Battle of Amiens…

The Battle of Amiens, also known as the Third Battle of Picardy, was the opening phase of the Allied offensive.  It began on August 8, 1918 and ended on August 18.  Later known as the Hundred Days Offensive, this was the battle that ultimately led to the end of the First World War.  (For more information, see https://en.wikipedia.org/wiki/Battle_of_Amiens_(1918) and a short video clip at https://finance.yahoo.com/video/battle-amiens-started-century-ago-173913821.html)

A few years ago, a short video on ‘The 100th anniversary of the Battle of Amiens and Canada’s Hundred Days’ was prepared and is available on YouTube: 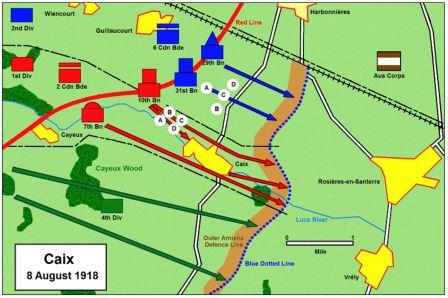 According to the war diary of the 14th Battalion, on the morning of August 9, 1918, the Regiment was ordered to “…march towards Cayeux, the headquarters of the 2nd Canadian Infantry Brigade.  The march was very difficult owing to the congested traffic on the road. The Battalion was ordered to support the 8th Canadian Battalion and moved to assembly positions….”

By 11:40 am they were in position, for the expected attack at 1 pm.  “… The attack was made over very flat ground and many casualties were caused by the intense machine gun fire…”  Among the casualties killed in action that day was Ted Arsenault.

As mentioned at the beginning of this posting, James CAIRNS, who served with the 8th Canadian Battalion, also lost his life that afternoon.

…Buried at Manitoba Cemetery outside Caix… 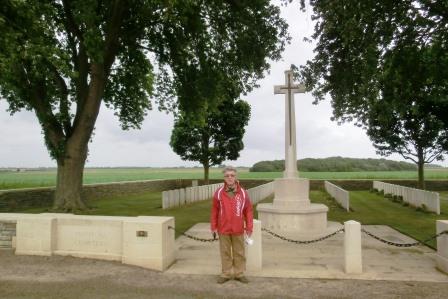 Like so many WW1 cemeteries in France, Manitoba Cemetery, where both James Cairns and Theodore (Ted) Francis Arsenault are buried, is in a rural location, surrounded by farmers’ fields.  It was fitting that during our visit in September 2017, bales of hay, a familiar site on Prince Edward Island during this period, surrounded the cemetery. 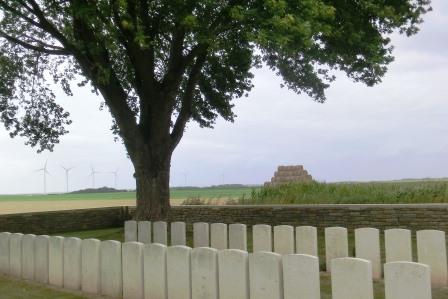 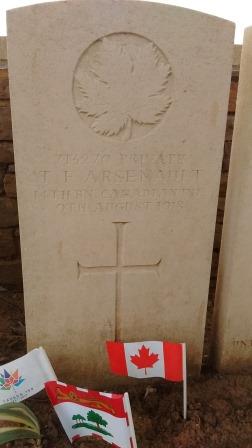 Thank you to Colleen Arsenault and Steven Arsenault for sharing information on their great-uncle and their family’s ongoing military service.  If you have photos or information to share, please let Pieter know. Email him at memorialtrail@gmail.com, comment on the blog, or tweet to @researchmemori1. 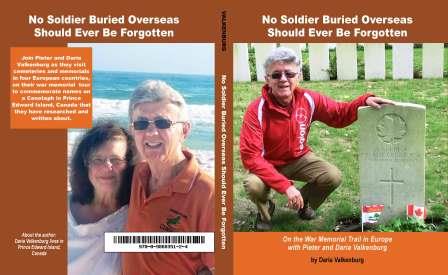 Daria’s book ‘No Soldier Buried Overseas Should Ever Be Forgotten‘ is now available.  For more information see https://nosoldierforgotten.com/

6 thoughts on “On The War Memorial Trail….. The WW1 Soldier From Abrams Village Buried In Manitoba Cemetery in France”