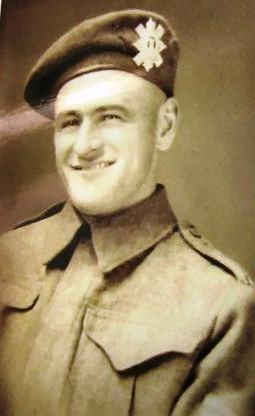 Shortly afterwards we received another submission on Charles Borden Tuplin, this time from June Gillis.  “…Charlie Tuplin was our neighbour in Indian River when I was growing up, and he went overseas with my older brother, Bruce Gordon. Bruce survived the war, but Charlie didn’t...” she told us.  June’s late husband, Dr Wilfred R. ‘Bunny’ Gillis, grew up on a family homestead in Indian River, and also knew the Tuplin family.

Born March 13, 1910 in Indian River, Charlie was the son of William and Minnie Tuplin, and worked as a fisherman and a miller prior to enlistment.  His father, who died in 1944, was a miller.

In 1943 he was in Aldershot, Nova Scotia, taking advanced infantry training.  His service file notes that in an interview he was “…anxious to proceed overseas…”

In June 1944, he requested a demotion to Corporal so that he could serve overseas.  This was granted on June 25, 1944, and he left for the United Kingdom the next day. On August 18, 1944 he was in France with the PEI Light Horse Regiment.  On October 13, 1944 he was transferred to the Black Watch Regiment’s D Company, Platoon 18.

The Perry family had written that “…He was shot on December 7, 1944, was taken as a POW but died the next day…” This matches what is in Charlie’s military service file, but an account by the late William McNally of Summerside, who was interviewed by Charlie’s cousin Ann Tuplin Nunes, gave a different version of how Charlie lost his life.

According to William McNally, as per an account by Ann Tuplin Nunes that June Gillis shared with us, on December 7, 1944, he and Charlie “…were stationed by the Maas River in Holland. In order to enable Canadian soldiers to cross the river, a makeshift bridge was made by putting planks over little boats...”

While crossing the bridge, the two men were talking to each other, and crossed to the other side safely.   “….They got to the other side and went a quarter mile along the river when they ran into the German army….”

The officer in charge, Major E.W. HUDSON, had decided upon a “…hit and run raid to try to get prisoners and find out from them what was going on in the German lines….” The Canadian soldier contingent drove the Germans back “….one-half mile. By then it was the middle of the night.  They came to a village where there were three houses which stood out from the others….”

McNally, Tuplin, and two other soldiers “…headed for these houses because there was a lot of shooting coming from that direction…”  The men thought German soldiers were in the houses, and they wanted to “…knock out the machine guns….”

Unfortunately, the men were being shelled with mortar bombs.  “…Charlie was to the right of McNally and ten or twelve feet ahead of him. McNally saw Charlie falling.  He hit the ground and never moved...”

McNally ran to check on Charlie, but he appeared lifeless.  After turning him over, McNally noticed that “…there was blood on his neck...”  He may have been wounded in more than one place, as McNally believed that “…if he was wounded only in the neck, he should have showed some sign of life….”  There was speculation that he may have been “…shot in the lower stomach and killed instantly….”

Stretcher bearers were sent for, while McNally and the other men continued on their mission.  “…The next day, McNally inquired as to what had happened to Charlie and was told that, when the soldier with the stretcher bearers returned, Charlie’s body could not be found….”

The Black Watch war diary entry for December 7, 1944 indicates that the unit was just east of Mook, a town along the Maas River.  The following casualties were reported:

In addition, 14 men were wounded. According to research by the Groesbeek Airborne Friends, this December 7, 1944 event was named ‘Operation Mickey Finn’.

Pieter decided to look at the service files of the other soldiers reported missing, to see if more clarity about what happened and the exact location could be determined.  He discovered that all of the missing had died, and, with the exception of Charlie Tuplin, had been temporarily buried in the area.

The service file for Lt MacKenzie had an account that differed in some respects from William McNally’s recollections.

On December 14, 1944, a ‘Questionnaire On A Missing Officer Or Soldier’ included testimony by Major Hudson in which he stated that Lt MacKenzie was last seen by “…Pte C A CHARRON and Pte W J STEPHENS…” With them was “… Cpl C B TUPLIN…”

MacKenzie was leading his men in an attack when he was “…wounded on the enemy position.  Attempts were made to evacuate him but the men carrying him were also wounded.  One man managed to evacuate himself and told the stretcher bearers that Lt MacKenzie was wounded, but they were unable to find him...”

Both Pte Stephens and Charlie Tuplin were wounded.  Pte Charron was the soldier able to escape and go for help.  His statement recorded that “… At approximately 20:15 hours on December 7, 1944, I was with Lt T W MacKenzie about 10 yards from house 25.  I heard Lt MacKenzie call out for help, saying he had been hit...”

After learning that MacKenzie had been hit in the back and was paralyzed, “... Cpl C B Tuplin and I tried to drag Lt MacKenzie out as we were too exposed walking.  After going about 15 feet we found we couldn’t manage so called to Pte W J Stephens to help us.  Before he got to us Cpl Tuplin was hit.  Lt MacKenzie and Cpl Tuplin told us to go for a stretcher bearer…”

Stephens and Charron left, but “… after going about 15 yards, Pte Stephens was hit, so I kept going and told two of the stretcher bearers where I had left Lt MacKenzie and Cpl Tuplin. They made a search of the ground but were unable to find either of the wounded men….”

MacKenzie and Tuplin were missing, but Stephens was found and hospitalized.  Like Charlie Tuplin, Lt MacKenzie was initially recorded as a prisoner of war. MacKenzie’s body was later found buried in a temporary cemetery, near where he lost his life.

According to Charron’s testimony, Charlie Tuplin was alive after being hit.  Perhaps William McNally came across Charlie Tuplin after Pte Charron left to go for help.  In the dark and under mortar fire attack, it’s very likely that he would not have seen Pte Stephens or Lt MacKenzie.  It’s also possible that William McNally found another soldier that he mistook for Charlie. 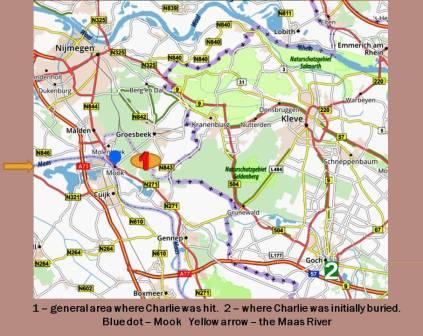 Map shows area of the action on December 7, 1944, and the location in Goch where Charlie Tuplin’s body was initially buried. (Map source: https://www.viamichelin.com)

Although the official records state that Charlie died while a prisoner of war on December 8, 1944, McNally believed that “…he died the night of December 7th and was never a prisoner….”

What happened to Charlie Tuplin?  After the war ended, Charlie was identified, through his dental records, as a soldier buried in a public cemetery near Goch, Germany.  This is not near where he was hit, and he is the only one of the missing men identified in the war diary that was not initially buried near the location where they fell.

Therefore, the information in his service file is likely correct.  He was picked up by German soldiers while still alive, died shortly afterwards, and was buried by the Germans.

One thought on “On The War Memorial Trail….. The WW2 Soldier From Indian River”