October 17, 2019. On October 12, 2019, the day of the unveiling of the memorial panel Netherlands to honour WW2 pilot Flight Sgt Elmer Bagnall MUTTART and the crew of Halifax L9561 finally arrived, with a series of events organized by the Stichting Missing Airmen Memorial Foundation, a non-profit volunteer organization based in the province of Friesland. (See Unveiling of the Memorial Panel for Downed WW2 Plane Halifax L9561 in Wons) In the last posting, our group visited the Harlingen General Cemetery where Muttart is buried. (See On The War Memorial Trail…..The Visit To Harlingen General Cemetery)

From the cemetery, we were invited for lunch and presentations at Het Hannemahuis, a museum in Harlingen.  Our bus was too big to navigate the narrow streets of this maritime city, and we had to walk across the canal to the other side of the canal where the museum is located in the centre of the city, and reached through a very narrow street. 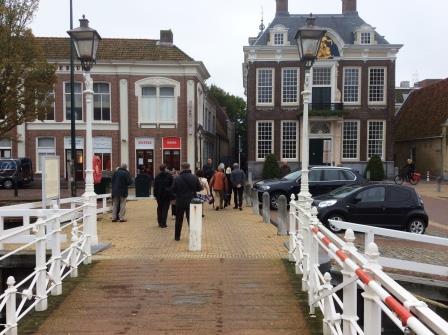 We cross the canal and walk through a narrow street towards Het Hannemahuis in Harlingen. (Photo credit: Annie Lee MacDonald)

We were treated to a much appreciated warm cup of coffee or tea, cookies and sandwiches for lunch, and had a chance to meet and visit with the Dutch guests invited for the official commemoration events. 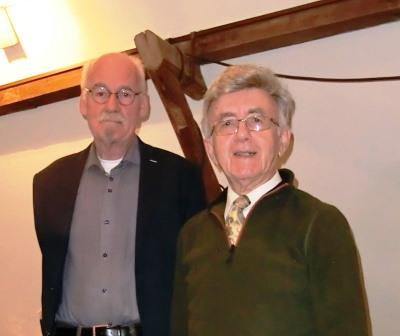 Museum volunteer Bauke Posthuma, who researched the men buried in the Commonwealth War Graves section of Harlingen General Cemetery, including Elmer Bagnall Muttart, chats with Pieter and gives an update on the publication of his book. (Photo credit: Daria Valkenburg)

Everyone had a chance to see a model of the type of Halifax plane flown on the night of October 12, 1941, made by Lex Bosma. 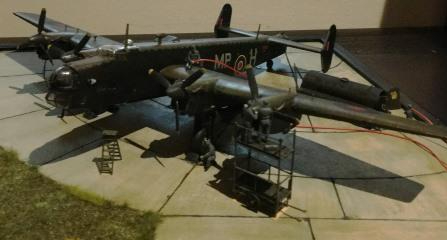 The master of ceremonies for the presentations was Hans Groeneweg, President of the Stichting Missing Airmen Memorial Foundation, who introduced the speakers.

Mayor of Harlingen, His Worship Roel Sluiter, gave a warm welcome to all of us:

“Welcome in Harlingen!  Very nice to have you here on this occasion on which you can look with mixed feelings.

On the one hand: we are celebrating our liberation, 75 years ago, every day now, since the liberation of our country started in the south of the Netherlands in early September 1944.

On the other hand: we remember these days also all the sacrifices that were made and all the losses we suffered, before our liberation was a fact. Mixed emotions; joy, gratitude and also sadness by the ancestors of the liberators that were killed in action.

Our attention this afternoon is concentrated on the tragic adventure of the Halifax L9561 that was attacked by a German fighter plane and crashed near the village of Wons in October 1941.

Seven crewmembers of the Halifax rescued themselves by parachute, the pilot, Elmer Muttart, however, did not survive. You just visited his grave, here in Harlingen.

That we are here today in remembrance of the events of that dark night of 12 October 1941 is also to be seen as a great “thank you” for all the efforts that were needed to eventually liberate our country! I hope you will have a very pleasant afternoon!”

The main event was an excellent presentation by Alexander Tuinhout and Douwe Drijver, who gave a summary of the events that led to the crash on the night of October 12, 1941 and what happened to the crew members in the aftermath.  The quote “He died that we might live….” had been made by co-pilot Norman Frank TRAYLER. 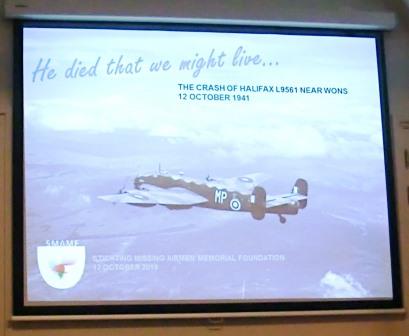 A presentation about the crew of Halifax L9561 was made by Alexander Tuinhout and Douwe Drijver at Het Hannemahuis. (Photo credit: Daria Valkenburg)

Following the presentation, Elmer MacDonald and Donald Coutts were invited to give remarks about Flight Sgt Elmer Muttart.

“Your Worship, the mayor of Harlingen; Colonel Timothy Young, Canadian Defence Attaché to The Netherlands, Belgium, and Luxembourg; Mr. Shane Aldridge, representative of the British Embassy and a grandson, I understand, of one of Muttart’s crew; distinguished guests, including the families of Muttart’s crew aboard  the Halifax L9561 on that fateful day; members of the Missing Airmen Memorial Foundation who organized this event and Mr. Pieter Valkenburg of the Borden-Carleton Cenotaph Research Project of Prince Edward Island, Canada.

My name is Roderick Elmer MacDonald. I have come from Prince Edward Island, Canada for this very special occasion. We owe a debt of gratitude to Mr. Pieter Valkenburg, who took a special interest in Elmer Bagnall Muttart’s name that was inscribed on the War Memorial outside the Borden-Carleton Legion in Prince Edward Island. He researched his role in World War Two. He learned and shared the events that unfolded in this area that led to him sacrificing his life for the sake of a village.  Only through Pieter did we learn the details and only now can we truly appreciate his sacrifice. We are most appreciative, also, to the Missing Airmen Memorial Foundation for their work in providing us with this opportunity.

It is especially meaningful for me to be here today because I have a special connection. You see the Muttarts and the MacDonalds on Prince Edward Island were close family friends. On March 20,1940, when my parents were married,  Elmer was Best Man for my father. On October 12,1941, the Halifax L9561 plane was shot down and the only fatality was the pilot Elmer Muttart. This news was devastating to the families. In 1943 I was born and I was named after him in his memory. I always treasured the fact I was called after him but only through Pieter’s research did I come to realize the sacrifice he made and to learn what an extraordinary Canadian he was.

I want to introduce you now to Elmer Bagnall Muttart’s close relative, who is here today, his only sister Helen’s son, Mr. Don Coutts from North Bay, Ontario, Canada.”

“Your Worship, the Mayor of Harlingen, distinguished dignitaries and guests, including the families of Elmer Bagnall Muttart’s crew aboard the HALIFAX L9561, members of the Missing Airmen Memorial Foundation who has organized today’s ceremonies and activities…my name is Don Coutts.

On behalf of my mother, Helen Muttart Coutts, my late father Elgin Coutts who died just over two (2) months ago who knew that I would be coming to Holland for these ceremonies, my brother Peter, and our families, we thank you for being here and for today’s ceremonies.

The Coutts, the Muttart families, and relatives would like to thank Mr. Pieter Valkenburg for taking the interest in the names on the Borden-Carleton, Prince Edward Island Cenotaph. We are indebted to him for his research into Elmer Muttart and his crew on that fateful day—–October12th, 1941. A special thanks to Daria, Pieter’s wife for her assistance in this project.

Elmer was named after his uncle Elmer Bagnall who had looked after the Bagnall Farm in Hazelgrove, Prince Edward Island during WORLD WAR 1 and died quite suddenly in August 1917 at a very young age. Elmer Bagnall Muttart was born on March 14TH, 1918—–just seven (7) months after his uncle had died.

Elmer had three (3) uncles who fought in WORLD WAR 1. They were Gordon Bagnall, Harold Bagnall, and Fred Bagnall who was wounded at Sanctuary Wood, in France.

Elmer graduated from Acadia University in Wolfville, Nova Scotia, Canada with a Bachelor’s Degree in Science (Engineering) in 1939. Elmer had enlisted in the Royal Canadian Air Force in June 1940. He had started the process to enlist in the RCAF in the fall of 1939 but it took some time for the paperwork to be completed.

I never met my Uncle as I was not born until October 1950, some nine (9) years after he died. My grandparents always had a framed picture of Elmer in his pilot’s uniform in their house in Cape Traverse, in their house in Bedeque, Prince Edward Island where they moved to in 1949, and in Toronto, Ontario, Canada where they moved to in 1965 to be closer to my Mother and our family.

My mother has a framed picture of Elmer in her Retirement Residence in Toronto, and previously it was displayed in our homes in Toronto.

Once again, thank you for today’s ceremonies.”

Thank you to Het Hannemahuis for hosting us.  Enormous thanks to Alexander Tuinhout and Douwe Drijver for their presentation.  An overview of the crew of Halifax L9561 will be the subject of the next blog posting before we move on to the unveiling of the memorial panel in Wons.  If you have stories or photos to share about the crew or the events of October 12, 2019, please contact Pieter at dariadv@yahoo.ca or comment on the blog.

3 thoughts on “On The War Memorial Trail…..The Presentations At Het Hannemahuis in Harlingen”