September 22, 2022. When we did a story on Joseph ‘Joe’ Edmund HENNEBERY, who is buried in the Canadian War Cemetery in Groesbeek, his niece, Teresa Hennebery, mentioned that “…My mother Mary and I were in Holland in May 2001 for a commemoration ceremony for her brother (also named Joe) who was killed in Rha a couple of weeks before my other Uncle Joe died.  It was so beautiful and the people of Rha treated us like Royalty….”

Teresa was referring to her mother’s brother, Michael Joseph ‘Joe’ MCKENNA, who also lost his life during WWII.  In addition to visiting the Canadian War Cemetery in Groesbeek, Teresa and her late mother “… visited Holten Cemetery where Joe McKenna is buried…” (See https://onthewarmemorialtrail.com/2020/05/31/on-the-war-memorial-trail-a-face-for-joseph-hennebery/) 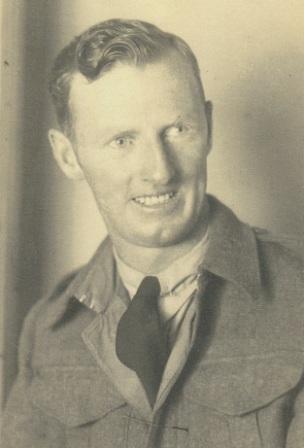 …Joe began basic training in the summer of 1942…

At the time of his enrollment on August 28, 1942 with the #62 Basic Training Centre in Charlottetown, under the National Resources Mobilization Act (NRMA), he had been working on his father’s farm since he left school.  Joe’s mother had died in 1932, and he was the oldest son with two brothers and four sisters.

The NRMA was a compulsory national registration for military service, originally for home defence, but later for service overseas as WWII continued. (See https://www.thecanadianencyclopedia.ca/en/article/national-resources-mobilization-act)

On October 28, 1942, he was sent for advanced training to A23TC in Halifax, Nova Scotia for a month, then sent to the #22 Anti Aircraft Battery in St. John, New Brunswick.

Joe remained there until March 1, 1943, when he formally enlisted for active service in Saint John, New Brunswick and was transferred to the 8th Anti Aircraft Battery, Royal Canadian Artillery, which was also in St. John.

… Joe transferred to the Canadian Infantry….

After completing basic training, Joe was transferred to the A14 Canadian Infantry Training Centre (CITC) in Aldershot, Nova Scotia on June 11, 1944.

On August 31, 1944 Joe was sent to Debert, Nova Scotia, the final staging and training area for troops going overseas.

Joe’s overseas service began when he boarded a troop ship on October 14, 1944, arriving in the United Kingdom on October 20, 1944.  Upon arrival he was assigned to #4 Canadian Infantry Reinforcement Unit (CIRU).

On November 24, 1944 he went to Northwest Europe as part of a reinforcement unit, then was assigned to the Headquarters of the 8th Canadian Infantry Brigade on January 26, 1945.

Joe had his final transfer on March 14, 1945, when he joined the Queen’s Own Rifles as a rifleman in ‘A’ Company.  The Regiment was in the Reichswald Forest in Germany where Operation Blockbuster had ended.  Reinforcements were needed as preparations began for Operation Plunder.

Operation Plunder, which began March 21, 1945 and ended April 1, 1945, involved the crossing of the Rhine River to the north of the Ruhr industrial region in western Germany.  (See https://en.wikipedia.org/wiki/Operation_Plunder)

After crossing the Rhine River in Germany, the Queen’s Own Rifles entered The Netherlands.  Their new objective was to capture the town of Rha.  The town was near a bridge crossing.  In ‘Battle Diary’ author Charles Cromwell Martin explains its importance. “…The enemy command headquarters for the remaining part of Holland was located at Appeldoorn, and the bridge was the approach that led there…”

Martin was the Company Sergeant-Major, ‘A’ Company, in the Queen’s Own Rifles.  He noted there were difficulties due to “…the complete changeover of our men and leaders.  We had received about thirty reinforcements….. But everything was too new, too untried, and this included our new company commander…”

…The Regiment prepared to liberate the municipality of Steenderen….

On the afternoon of April 4, 1945, the Queen’s Own Rifles travelled along the IJssel River.  They had already liberated the villages of Steenderen and Toldijk the day before.

The war diary for April 4, 1945 recorded that “… ‘C’ Company was to occupy Rodenburg… and ‘D’ Company to go to Hoefken. ‘A’ Company to Eekhorn and ‘B’ Company to Zwaarte  Schar… The only trouble encountered on the move was by ‘A’ and ‘C’ Companies, who came under fire from an enemy S.P. gun on the other side of the IJssel river and mortar fire from Rha….” S.P refers to self-propelled artillery.

On April 5, 1945 the war diary stated that “…plans were laid for an attack that afternoon on the bulge of the east bank of the IJssel…”  Around 3:30 pm, they occupied “…enemy trench systems that had been abandoned…”

‘A’ Company’s assignment was to occupy Rha. Led by 9 platoon, they “…went into their series of trenches, which were full of water, and followed them around to the outskirts of Rha.  There was quite a lot of sniping and mortaring but the trenches gave them good cover…”

By 8:00 pm “… the end of the trenches was reached….” and they began their way towards the town.  “….It was getting night time but there was plenty of light from burning buildings…”  They encountered “…furious resistance…” from bazookas.  “…Our own weapons were in very bad shape from the mud encountered in the trenches…”

In the midst of counterattacks, two sections of 7 platoon got cut off from the rest. They “…got into a house near the centre of the village…” This was the Berendsen farm.

By the time the night was over, the war diary reported that “…the final count of casualties was 5 wounded, 5 killed, and 6 missing…”  Four were found killed in the barn on the Berendsen farm.

…The Battle of Rha was deadly….

One of the men killed during the Battle of Rha, and found in the barn, was Joe McKenna. In the 2001 Special Edition of ‘De Zwerfsteen’ (The Boulder), a publication from the Historical Society of Steenderen, a bit more information was provided.  The Berendsen farm was located at 5 Rhabergseweg, and had German troops billeted on the farm.  During the evening of April 5, the family hid in the cellar.

One daughter, Be Helmerhorst-Berendsen, who was 20 years old at the time, gave an eyewitness report.  “…The Germans were not present at the time we came under fire. They must have been in the trenches in the surrounding area….”

While they were in the cellar the hatch opened and two Canadians came down the steps.  “…One was injured on the leg and the other one had severe injuries on the head…”  The next morning, the Germans opened the hatch and ordered them to come out.  The Canadians were taken prisoner, the rest allowed to leave.

“…As we were leaving the building through the barn, we saw the Canadians lying there, dead.  One lay behind the cows in the gutter.  The second lay in the cows’ trough, still holding the rope of the cow’s neck in his hands, and the third one lay near the back door…”

….Joe was initially buried in Rha….

The official death report of the military authorities noted that the helmets of the soldiers had holes in them, likely caused by grenade fragments. They had been killed by Germans who were in trenches about 20 metres in front of the farmhouse.

The date of deaths on this report was recorded as April 5, 1945 for each soldier.  The date of April 6, 1945 in the service file and on the gravestones was likely due to when the bodies were found and the notice of deaths were received and recorded.

Burial of 4 soldiers in Rha.  (Photo courtesy Hennebery Family Collection, but sent to the family by Henk Dykman.)

One of the organizers of the May 4, 2001 commemoration events in Rha, Reverend Hendrik ‘Henk’ Jan Dykman, wrote to explain that “…Joe died with three comrades in or near the farm of J Berendsen on April 5 1945. He was buried in front of it by German soldiers, with his name carefully put on the grave. The farmer’s daughter took care of the graves till the men were moved to Holten a year later….”

The other three soldiers were:

All 4 were reburied in the Canadian War Cemetery in Holten, The Netherlands.

The 5th casualty mentioned in the war diary was John George KAVANAGH, aged 23, son of Cora Kavanagh and husband of Emily Jean (née Haddleton) of Toronto, Ontario.  He is buried in the Steenderen General Cemetery in Steenderen, The Netherlands.

…Confusion about where Joe McKenna had been originally buried….

Teresa Hennebery explained that there was confusion about where her uncle was initially buried. “… I was at the graveyard at St. Mary’s church in Montague.  Here is a photo of my grandparents’ gravestone which also recognizes my Uncle Joe McKenna….please note reference to Doesburg. For many years his family thought he was buried in Doesburg….”

The confusion wasn’t just on the part of Teresa’s grandparents.  A Field Service Report dated June 7, 1945 recorded that Joe McKenna had died in Germany and been buried in West Bocholt, Germany!  The coordinates of the burial location were recorded as 911850.

… Joe was reburied in the Canadian War Cemetery in Holten….

We asked Henk Vincent from the Canadian War Cemetery in Holten if he could look up where Joe’s body had been before arriving for reburial, as we had a report that he had been buried in Rha.

A translation of his reply confirmed that Rha was where he was initially buried.  “…The East Gelderland area, where Rha is located, is often referred to as West Bocholt in the Canadian War Diaries. If I enter the coordinates QE911850 on the Nord de Guerre map I end up exactly in… Rha, so the report is correct, he was first temporarily buried in Rha….”

Teresa kindly wrote to say “… Thank you for all you are doing to keep the memory of soldiers buried in Holland alive.  I am so grateful for your work and dedication to this project…” It’s an honour to tell these stories, and we are very appreciative of the effort that families put into remembrance and are willing to share photos and information.

Thank you to Teresa Hennebery for sharing photos and information on her uncle, and to Henk Dykman for sharing a photo and initial burial information.  Thank you also to Henk Vincent for confirming Joe’s original burial location. If you have a story to tell, please let Pieter know. Email him at memorialtrail@gmail.com, comment on the blog, or tweet to @researchmemori1.

2 thoughts on “On The War Memorial Trail….. The WWII Soldier From Prince Edward Island Killed During The Battle Of Rha”