In a translation from the original Dutch, Edwin wrote that “…On your interesting blog I read about the 7 First Nations, who are buried in the Canadian cemetery in Adegem, Belgium.

At the Canadian War Cemetery in Holten I also happen to have about 13 First Nations and three Métis, who are buried with us, as a focus area.….”

Two of the Indigenous soldiers buried in Holten have been featured on this blog:

Edwin went on to say “…In addition, I am also involved in the Canadian War Cemetery in Adegem, where 38 fallen / killed soldiers of the Canadian Scottish Regiment are buried and of which I have also adopted two with my son….”  Edwin has done extensive research into the Canadian Scottish Regiment and last year began a website on them.  (See https://bordencarletonresearchproject.wordpress.com/2020/05/04/new-website-on-canadian-scottish-regiment-during-ww2/) 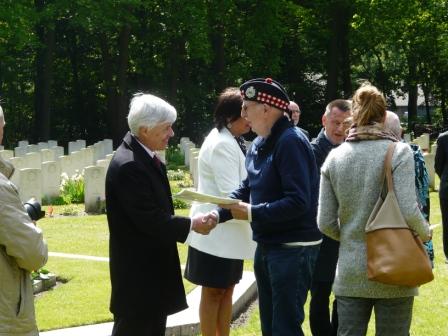 I asked Edwin what was involved in adopting a grave, since the upkeep of the graves and cemeteries for our Canadian war dead is the responsibility of the Commonwealth War Graves Commission.  My guess was that it involved visiting the grave and perhaps being in contact with family members back in Canada.  Edwin confirmed this and went on to explain that “...You are supposed to lay flowers at the adopted grave now and then and I also ask my Belgian contact person there to do so for me sometimes. There can also be contact with family members….”

Pieter and I have been to several cemeteries in Europe and in many of the smaller ones we were the only visitors in a long while, according to the visitors log book.  So, the adoption of graves is a great idea. 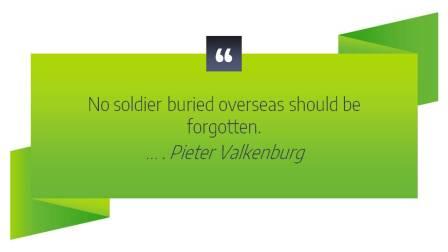 Edwin explained that, unlike in The Netherlands, “…If you adopt a grave at the Adegem Canadian War Cemetery you receive a certificate of this adoption during a yearly ceremony in May…”  The Dutch War Graves Commission no longer issues certificates, “…not since the 1960s...”

Thank you to Edwin van der Wolf for sharing photos and information about the grave adoption at the Canadian War Cemetery in Adegem.  If you have information to share about Canadian soldiers, please contact Pieter at dariadv@yahoo.ca, comment on the blog, or send a tweet to @researchmemori1.

If you are reading this posting, but aren’t following the blog, you are welcome to do so.  See https://bordencarletonresearchproject.wordpress.com or email me at dariadv@yahoo.ca and ask for an invitation to the blog.

One thought on “On The War Memorial Trail….. Adopting A Grave In Adegem”