June 20, 2021. Sometimes information on those who’ve served in WW1 and WW2 comes in unexpected ways.  This was the case when Edwin van der Wolf emailed us to say that “…I accidentally found the story of Chaplain William Seaman from your island, who died in Normandy on July 21, 1944. The names of his relatives are no longer legible due to moisture on the attached document….”

Edwin is one of the researchers at the Canadian War Cemetery in Holten, The Netherlands, so we were surprised that he sent us information on someone who died in France.  The document he sent was a form filled out by family of the deceased.  It was indeed a water damaged document, but it was clear to see that 3 members of Chaplain Seaman’s family – his mother and two brothers – lived in Breadalbane, Prince Edward Island in 1944.

A friend, Evelyn Stewart, lives in this community, and I asked her about the Seaman family.  She knew one couple that lived in a nearby community and contacted them.  That’s how we came to meet Lindsay and Norma Seaman.  Lindsay’s father, Cedric, was one of the two brothers who had been living in Breadalbane in 1944.

Born June 14, 1910 in Springfield, Prince Edward Island, William ‘Alfred’ SEAMAN was the son of William ‘James’ Seaman and Sophia Elizabeth Brown.  He attended Mount Allison University in Sackville, New Brunswick, graduating with a Bachelor of Arts in 1935.  On July 21, 1936 he married Louise Van Duyn Trueman in Truro, Nova Scotia, and then in 1937 received his Certificate of Theology from Pine Hill Divinity Hall, a United Church of Canada theological school, in Halifax, Nova Scotia.

He spent three years as a minister in Rawdon, Nova Scotia and two years in River John, Nova Scotia.  On August 2, 1940 he joined the militia as the Chaplain for the 2nd Battalion Pictou Highlanders, before being appointed full time with the Canadian Chaplain Service on May 15, 1942.  He was given the rank of Honorary Captain and initially sent to Sydney, Nova Scotia, and later to Aldershot, also in Nova Scotia.

By this time, he and Louise were the parents of two children: Lorna Louise and Andrew Thompson.

On June 25, 1943 he left Canada, arriving in the United Kingdom on July 7 and attached to the Headquarters (HQ) of the 2nd Canadian Infantry Division. A year later, on July 6, 1944 he arrived in France with 5 Canadian Field Regiment of the 6th Division Headquarters (HQ).

On July 14, 1944, while working to retrieve wounded soldiers during the Battle of Caen, he was struck by an exploding mortar shell. Shrapnel pierced his leg, side, and head, and he died a week later, on July 21, the date of his wedding anniversary.  Norma Seaman recalled that “…he was getting better after being wounded, but infection set in…”  (See https://en.wikipedia.org/wiki/Battle_for_Caen and https://united-church.ca/blogs/round-table/chaplain-among-those-lost-normandy-75-years-ago)

He is buried at the Bény-sur-Mer Canadian War Cemetery in France (See https://en.wikipedia.org/wiki/B%C3%A9ny-sur-Mer_Canadian_War_Cemetery). 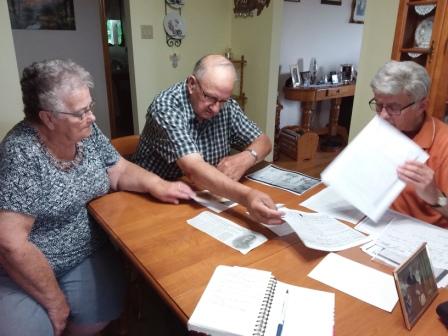 Lindsay noted that “… Louise never remarried.  She taught at Mount Allison University...” Until her retirement, Louise was a Professor of Home Economics at the university.  In 1987, she established a fund in memory of her husband, with the fund’s income earmarked for books in Religious Studies.

Thank you to Edwin van der Wolf for letting us know about William ‘Alfred’ Seaman, to Evelyn Stewart for putting us in contact with the Seaman family, and to Lindsay and Norma Seaman for sharing photos and information on William ‘Alfred’ Seaman. If you have photos or information to share, please contact Pieter at dariadv@yahoo.ca, comment on the blog, or send a tweet to @researchmemori1.

If you are reading this posting, but aren’t following the blog, you are welcome to do so.  See https://bordencarletonresearchproject.wordpress.com or email me at dariadv@yahoo.ca and ask for an invitation to the blog.

You are invited to subscribe to our YouTube Channel: On The War Memorial Trail With Pieter Valkenburg: https://www.youtube.com/channel/UCJ591TyjSheOR-Cb_Gs_5Kw.

One thought on “On The War Memorial Trail….. The WW2 Chaplain Who Lost His Life In France On His Wedding Anniversary”