March 4, 2021. Once in a while, when we do a story about a soldier, we find more information than we ever expected.  This was the case when we were contacted by Earle Davison of Kensington, Prince Edward Island, and told the story of his uncle, William Earle DAVISON, a WW1 soldier who lost his life in France while serving with the Sixth Canadian Siege Battery.  (See https://bordencarletonresearchproject.wordpress.com/2020/11/08/on-the-war-memorial-trail-remembering-ww1-soldier-william-earle-davison/) 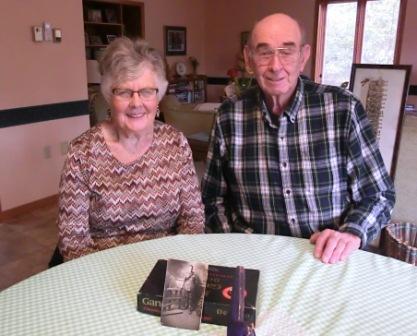 When Earle contacted us, he mentioned a box containing the last possessions of his uncle.  One of the items he identified was “… a copy of a letter taken from a German soldier…”  We were confused by the word ‘copy’ and wondered what kind of letter it could be.

When we saw the actual document, it was clear that it was not an original letter.  It appeared to be a published leaflet, as the heading at the top of the page was typeset, with handwriting reproduced below it.  Someone, perhaps Earle Davison himself, had written a brief translation in English of the title ‘Eine Stimme vom Grab’ (‘A Voice From The Grave’).

The handwritten portion was in an old German script and appeared to be a poem.  Our only clue was that in English was written “…Copy of a letter taken from a German soldier to his people, telling them of the real conditions at the front…”  However, the first word in German…. ‘gedicht’ …. indicated this was a poem, not a letter.

The full heading was translated as:  “… A Voice From The Grave…. Poem from the diary of a German soldier who was a victim of Imperial domination….”

We didn’t know what to make of it, so a copy of the document was sent to Berlin historian Ralf Gräfenstein.  Was he able to read the handwriting and tell us what it was all about?

Ralf replied that “… It is not a letter of a German soldier, but the handwritten text of an old German Anti-War song….”  A song?  That was a surprise twist!  “…The text of the ‘letter’ differs slightly from the ‘official’ version of the song. I think that this document is part of war propaganda to increase the war-weariness of German soldiers. Maybe the Allied troops found the ‘letter’ (the handwritten copy of the song) on a dead German soldier and later they used it for their propaganda? …”

Ralf found a YouTube version of the original song, which you can listen to here…

Ralf’s investigation brought up two interesting points.  The poem was based on an actual German song, and his suggestion that it was used for war propaganda seemed valid as it was a published leaflet.  Two key questions remained…. Was it taken from an actual diary of a German soldier?  If it was war propaganda, who distributed it…. the Germans or the Allies?

The German Embassy in Ottawa joins the investigation

At this point, the document was sent to the German Embassy in Ottawa, where Chief Warrant Officer (German Army) Patrick Butzlaff, Assistant to the Defence Attaché, delved into this mystery.

Mr Butzlaff agreed that “…. the version of the poem printed on the letter is not entirely identical to the original.  It seems that the writer once heard it and independently recomposed the parts of the text that he could not remember 100%….”

Like Ralf, Mr Butzlaff noted the date of the poem, but had more information about it.  “…The original poem dates from 1870 in the Kingdom of Saxony (an ally of Prussia) and was written at the time of the 2nd Franco-German War…”

I’d never heard about this war, so was happy that he went on to explain that “… France declared war on Prussia because of claims to the throne which the Hohenzollern wanted to register in Spain. France felt surrounded by Hohenzollern here, when their claim to power now also reached their own country’s borders in the south.

The Germans successfully repelled a French attack and were able to win the war relatively quickly. Apparently this was not enough for the Prussian king, however, so he ordered an attack on France, thus triggering the 2nd Franco-German War.

The workers’ movement, which was growing stronger and stronger in all parts of Europe back then, protested against this war and tried to influence events by writing protest letters and distributing anti-war poems to soldiers going to the battlefields….”

Mr Butzlaff explained that “…the motto of this movement was ‘Proletarians of all countries unite’, which can also be read between the lines of the poem...”

What does the poem say?

So what did the poem in the leaflet that WW1 soldier Earle Davison saved actually say?  Identifying all the words in the handwriting was problematic.  While Ralf was able to transcribe most of the text, a few phrases defeated him.

Mr Butzlaff came to the rescue. “…The poem is written in ‘Suetterlin’, the old German handwriting. I asked a friend of my late grandmother, who is now 96 years old, to take a look at the text and solve the riddle of the unclear words.  She replied that the writer seems to have written quickly, which means that the letters do not always look as they should…”

By now, I was very eager to know what the poem said.  A translation, prepared by one of his colleagues, was provided by Mr. Butzlaff: Translation of German Anti-War Poem

Who distributed the leaflet?   German or Allied Forces?

“…Hermann Wanderschreck (1907-1971) was an editor and lecturer in the National Socialist Reich Ministry of Popular Enlightenment and Propaganda, theatre critic, and a playwright. His dissertation (1934) and book mention that British troops dropped leaflets with the title ‘Eine Stimme vom Grab’ (A Voice From The Grave) from aeroplanes, over the front in Western Europe as propaganda.

A translation Ralf provided from Wanderschreck’s book added more clarity. “…The English dropped leaflets in varying sizes. Often, poems taken from the diaries of German soldiers were released. Once, under the title ‘A Voice From The Grave’, the accusation of what was purported to be a dead man from the grave was reproduced…”

This likely explains how Earle Davison came into possession of the leaflet.  It dropped from the sky, and perhaps someone explained the context of the leaflet, which he wrote down in English.  It also seems clear that the handwritten portion of the leaflet was taken from a diary of a German soldier.

As a theology student, Earle Davison would most probably have agreed with the anti-war sentiments, as was suggested by Mr. Butzlaff.  “…Perhaps the soldier was aware of the meaning of the poem and agreed in his conviction of the senselessness of war.  There were many soldiers on both sides in WW1 who took part in it because they had to, but were inwardly opposed to it….”

Thank you to Earle and Irene Davison for sharing the leaflet with us. Uncovering the amazing story about the leaflet’s history and translation of the contents was only possible due to the diligent research and help of Berlin historian Ralf Gräfenstein and Chief Warrant Officer (German Army) Patrick Butzlaff, Assistant to the Defence Attaché at the Germany Embassy in Ottawa.  A huge thank you goes to them for the time and effort they put into this piece of WW1 history.

If you have effects from a WW1 soldier, take a look and see if you have a copy of this leaflet!  If you do, please email us at dariadv@yahoo.ca, comment on the blog, or send a tweet to @researchmemori1.

You can subscribe to: On The War Memorial Trail With Pieter Valkenburg: https://www.youtube.com/channel/UCJ591TyjSheOR-Cb_Gs_5Kw