July 18, 2020.  When Pieter first began researching the names on the Cenotaph outside the Borden-Carleton Legion, he had a lot of slogging to do to figure out who these names represented.  There were no records, Legion minutes that might have shed light on how the names were selected were missing, and no newspaper accounts could be found that identified the names.

With a lot of hard work digging through war diaries, and reading of soldier records found at Library and Archives Canada, and the cooperation of the families of several  of these men in providing photos and letters written by them, 45 of the 46 names originally listed on the Cenotaph were identified.  Along the way, 2 more names that were inadvertently missed were added.

The one missing name, an F. Arsenault, remained a question mark.  No soldier could be identified as a possibility, so Pieter turned to records from the Canadian Merchant Navy.  There was one likely possibility…. Joseph ‘Francis’ ARSENAULT, born May 15, 1928 in Tignish.  At the time of his application for a Merchant Seaman’s Identity Certificate in Halifax on November 19, 1945, both he and his father Basil were listed as living in Albany.  His mother, Angeline Pire, had died in 1929 in Palmer Road.

With the help of Donna Matthews of Veterans Affairs, the story was pieced together.  Francis Arsenault’s first voyage was on the ‘Asbjorn’, as a U/Boy (Utility boy), serving between November 27 and December 7, 1945.

His next voyage was aboard ‘Noranda Park’, as a galley boy, sailing on May 20, 1946, arriving on July 29, 1946 in Port Alfred, South Africa.  The ship was then renamed ‘Oceanside’ and he signed on for another voyage from Port Alfred to Georgetown, Guyana.  While on ‘Oceanside’ he was promoted to second cook.

According to the website Fort Ships of WW2, “…the ‘Park’ ships were run by the Park Steamship Company and were named after well-known national, provincial or municipal parks in Canada.  The Company became a Canadian Government Crown Corporation in 1942 to own, manage and operate the ships allocated to it for the purposes of the war…. The appointed Canadian managers were responsible for the hiring of crew and officers as well as supplying the ships with fuel and supplies.  They had little control over the routing of the vessel, or the cargo as war materials took precedence… After the war the fleet was gradually disposed of…” (See http://fortships.tripod.com/Parks%20A-N.htm) 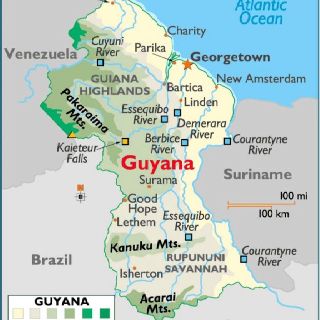 Unfortunately, ‘Oceanside’ was his last ship.  On August 12, 1946, while the ship was in Mackenzie City (now part of Linden) on the Demerara River in Guyana (in South America), he drowned after he fell out of a small boat while returning to the ship ‘under the influence of drink’, according to the Department of Transport Central Register of Seamen.

A large mining camp established by the Aluminum Company of Canada (later nationalized as the Guyana Bauxite Company) was in this area. Bauxite mined here would have been brought to Mackenzie City for processing and then loaded onto oceangoing vessels.  Most likely, this was why ‘Oceanside’ was in Guyana.

According to the Official Log of ‘Oceanside’ for August 12, 1946, the Captain wrote that “…This is to certify that the Chief Steward reported to me that at 00:30 this morning that F. Arsenault 2nd Cook, had fallen out of a boat when returning to the ship, very much under the influence of drink, and was drowned. He was not seen after he left the boat, he sank like a stone. J. Hilliard, who was with him, jumped after him to attempt to rescue him, but after swimming around for some time without finding any trace of him he gave up the attempt, but with others from the ship who saw the accident continued the search with flashlights along the beach in both up and down stream from the spot he fell in, hoping they may find him clinging to something. This search went on until 01:45, when the men returned to the ship, and the 3rd mate reported with regret that they were unsuccessful….”

It was a mystery why Arsenault was considered a veteran when he died more than a year after WW2 ended.  Donna Mathews explained that “…Per the Canada Remembers Section of Veterans Affairs, Arsenault was added to the Merchant Navy Book of Remembrance and Canadian Virtual War Memorial.  The cut-off date to include those that died during the Second World War was December 30, 1947…”

Thank you to Donna Mathews for her assistance in researching this merchant mariner’s story.  If anyone has more information or a photo for Francis Arsenault, please contact Pieter at dariadv@yahoo.ca or comment on the blog.