March 4, 2020. On the Cenotaph outside the Borden-Carleton Legion a few men lost their lives during wartime due to illness and are buried on home ground here on Prince Edward Island.  One of these men was John Daniel “Jack” FERGUSON.  He was born October 27, 1922 in Borden (now Borden-Carleton), the son of James Henry Ferguson and Margaret Ann Fraser.

When WWII broke out, Ferguson was anxious to serve and tried to enlist in Halifax but was refused due to his young age.  Instead he joined the Merchant Marines before successfully enlisting in the Royal Canadian Navy Reserve on May 5, 1941.  He was then placed on patrol duty out of Halifax.

Unfortunately, he became ill while serving aboard the patrol ship ‘Ross Norman’, and sent to Camp Hill Hospital in Halifax from the sick bay at H.M.C.S. ‘Stadacona’ on August 19, 1942.  His temperature kept spiking and lowering, with no known diagnosis able to be determined, even after blood tests. According to the medical report “Each elevation in temperature was accompanied by a severe chill.”

On August 30, 1942 he went into shock and at that point a diagnosis of peritonitis was made. (Per Wikipedia, peritonitis is inflammation of the lining of the inner wall of the abdomen and cover of the abdominal organs. Symptoms may include severe pain, swelling of the abdomen, fever, or weight loss.)  An operation was made, with two blood transfusions, and Ferguson appeared to improve over the next two days before worsening again.  Sadly, he died at 10:30 pm on September 6, 1942, just shy of his 20th birthday.

He was buried, with full naval honours, at St Peter’s Roman Catholic Cemetery in Seven Mile Bay.  A notice in the Summerside Journal, on 14 September 1942, page 2, recorded that “A detachment from H.M.C.S. Queen Charlotte at Charlottetown attended and acted as pallbearers and guard of honor. Mr. Patrick Martin, president of the Summerside branch of the Canadian Legion, represented the veterans at the service.” 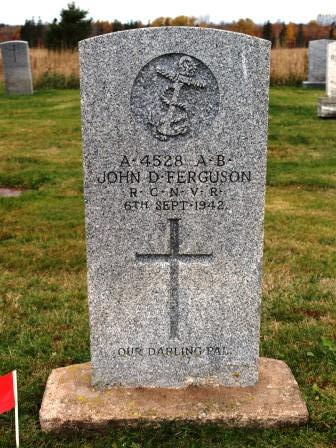 Unfortunately, no photo or family of Ferguson has been found as yet.  If you have information or photos to share about John Daniel “Jack” Ferguson please contact Pieter at dariadv@yahoo.ca or comment on the blog.