December 14, 2019.  In uncovering the stories of the names on the Cenotaph outside the Borden-Carleton Legion, perhaps one surprise has been how often an accident or illness can take the life of a soldier.  Being based in Canada during wartime was no guarantee of safety!   An accidental drowning in Quebec took the life of one WW2 soldier from the Island, Frank Lewis ARSENAULT. 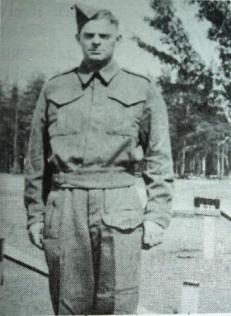 Born on August 14, 1913 in Kinkora, Frank Lewis (baptized as Francis Louis) was the son of John Hubert Arsenault and Elizabeth Jane, the husband of Grace Elizabeth Gaudet, and the father of four children: George Edmund, Mary Elisabeth, Martha Marie, and Joseph Henry.

A farm labourer before enlisting with the 8th Heavy Anti-Aircraft Battery Artillery Unit on June 13, 1941 in Charlottetown, he was transferred a week later to the 2nd Heavy Anti-Aircraft Battery Artillery Unit and sent to Petawawa, Ontario.  However, two and a half years before he enlisted, Frank Lewis had rheumatic fever, which left him with joint pains that made it difficult to do many activities, such as standing on his feet or carrying a rifle for long periods of time.  This led to him being reclassified within a few weeks of arrival in Petawawa, and transferred to the Royal Canadian Army Medical Corps, Home War Establishment Unit, on September 7, 1941, and based at the Petawawa Military Hospital.

On September 30, 1942, Frank Lewis, along with two other soldiers, R. Marino and E. J. Arsenault, received a pass from the Petawawa Military Camp where they were stationed.  They went by car to Le Passe, and then by ferry to Fort-Coulonge and had dinner at Bascheau’s Restaurant, where they were last seen alive.  Pte Marino’s body was found the next day in the Ottawa River.  Their car was found in the river on October 20 in the area of the dock on the Quebec side of the river.  The bodies of E. J. and Frank Lewis Arsenault were found in the Ottawa River on October 25.  However,  death was determined to have occurred on September 30 and this was the date listed on Frank Lewis’s death certificate.

The distance between Petawawa and Fort-Coulonge is about 69 km.  Source:  Google maps https://www.google.ca/maps

Frank Lewis was buried at St. Peter’s Roman Catholic Cemetery, Seven Mile Bay in Prince Edward Island.  His father was still alive and living in Kinkora, but his mother was deceased.  His wife and children were living in Pembroke, Ontario at the time. 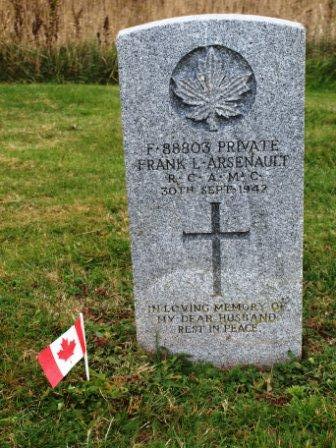 It’s unknown how the accident happened, but most likely the car went off the road in the dark and went into the river.  If anyone has more information or photos to share for Frank Lewis Arsenault, please contact Pieter at dariadv@yahoo.ca or comment on the blog.