September 22, 2019.  How many of you have an allergy, perhaps to a food, insect, or medication?  These days, people can be treated with the aid of an EpiPen, or by avoiding the item causing an allergic reaction. During WWII, when antibiotics first came into use, researchers and medical personnel soon learned that they were not the miracle drug for all. Adverse reactions to pain medication and anesthesia also happened.

While researching the names on the Cenotaph outside the Borden-Carleton Legion, Pieter learned of a few instances where soldiers on active duty died, not as a result of war, but due to a medical condition.  Such was the case for Harrison William CRAIG, born January 3, 1909 in Cape Traverse, the son of John Russell Craig and Mary Ellen Howatt.  Unlike most of the servicemen listed on the Cenotaph, Craig was married and a father. 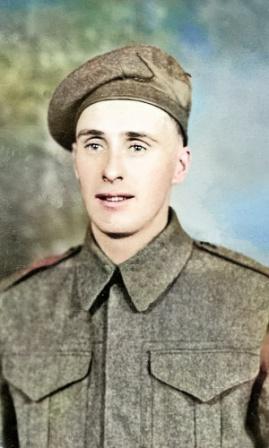 A farm labourer before enlisting with the PEI Highlanders in Summerside on February 23, 1940, Craig spent several months in a military hospital in Dartmouth, Nova Scotia before being sent to Valcartier, Quebec for training on June 3, 1941. In July 1941 he ended up in a military hospital again for several weeks, before leaving for Newfoundland on July 31, 1941.

Unfortunately, he again landed in and out of hospital in Betwood and Gander, with a final admission to the RCAF Hospital in Gander on December 1, 1942.  While being prepared for a tonsillectomy operation, he suffered an anaphylactic reaction and died a day later, leaving behind his widow, Mildred Smith, and four children, who were living in Central Bedeque.  The youngest child had been born 8 months earlier, on April 2, while the oldest was only 7 years old. Craig was buried in Gander Military Cemetery, Newfoundland.

“The community of Bedeque was deeply saddened by the news that on Wednesday, Dec. 2nd, Pte. Harrison Wm. Craig of the P.E.I. Highlanders, had passed away in the Military Hospital at St. John’s, Newfoundland, while on active service there. He was buried with full military honors in the Protestant Cemetery at St. John’s on Friday afternoon at 2 p.m., December 4. Pte. Craig joined the P.E.I Highlanders in March, 1940, and trained at Dartmouth, N.S. and in July 1941 went on active service to Newfoundland.

The sympathy of the whole community goes out to the family in their sorrow and loss.”

Craig’s death left the family in financial straits, as stated in a declaration made by his widow on January 4, 1943 before magistrate Earle. D. Leard.  Mrs. Craig wrote “I have a small house and lot on a quarter acre of land.  My husband had no insurance.  I have been paying for this place since he joined up and have no money.  I want to give my children an education.  I had quite a bill of expense when the last child was born and have no money at all laid aside.  I have to buy everything, including fuel.”  Craig’s military service record does not indicate if the declaration resulted in financial assistance.

If anyone can provide more information on Harrison William Craig, please contact Pieter at dariadv@yahoo.ca or comment on the blog.