September 11, 2018.  Not all war memorials are located overseas.  In researching the names on the Cenotaph outside the Borden-Carleton Legion, we’ve visited memorials and cemeteries in Europe and Canada, and met with family members of these soldiers.  Recently, with a group of friends from the British Motoring Association of PEI (BMAPEI), we did a special war memorial driving tour, in our iconic British vehicles, in Prince County, right here on Prince Edward Island.

The driving tour began, naturally, at the Cenotaph that Pieter is researching.

Members of the British Motoring Association of PEI by the Cenotaph outside Borden-Carleton Legion. (Photo credit: Daria Valkenburg)

First stop was a photo op at St. Peter’s Roman Catholic Church in Seven Mile Bay, which has a great view of the Confederation Bridge.

At Seven Mile Bay, with the Confederation Bridge in the background. (Photo credit: Pieter Valkenburg)

From Seven Mile Bay our convoy of cars travelled to Notre Dame du Mont-Carmel (Our Lady of Mount Carmel) Roman Catholic Church in Mont Carmel. Volunteer guide Antoine Richard explained that this beautiful church was built in 1898 for $75,000 and consists of 450,000 bricks, which were paid for by parishioners at 5 cents a brick!  The land for the church, rectory, and cemetery had been donated by Mr. Richard’s great-grandparents Thomas Richard and Susan Aucoin in 1820.

A group photo was taken at the memorial to honour WW1 and WW2 soldiers at the entrance to the cemetery.

Next on the list was the Bottle Houses at Cap Egmont, which is a memorial to one man’s ingenuity and talent.

Inside one of the Bottle Houses. (Photo credit: Heidi Litke)

From the Bottle Houses, we travelled to the Memorial Park in Cap Egmont that honours WW1 and WW2 Acadian and other Canadian soldiers.  The park is built on the spot of a former church, and has several memorials, as well as benches in a park-like setting. 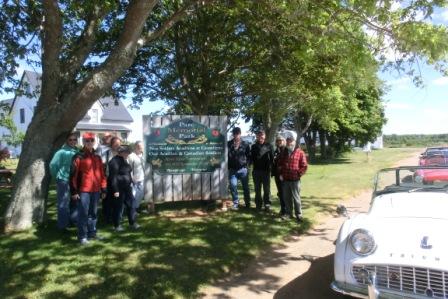 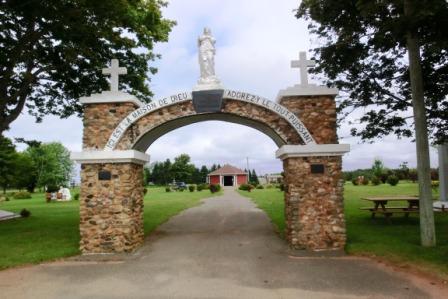 Just before lunch, we stopped at the #10 Bombing and Gunnery School Monument, located at the Visitor Information Centre in Mount Pleasant.  During WWII, this area was used to train pilots slated for bombing and gunnery runs.  During the period of operation, 22 lost their lives in various accidents, and a monument sits on the spot of the former airport used for the school.

Our last stop was for a very late, but well deserved lunch at The Catch in West Point, where a brief reflection on the day was made. Bill Glen was struck by the arches we’d seen at Mont Carmel and the Memorial Park in Cap Egmont.  “You never think of arches for a monument” he said.  Sandy Bentley noted how young the soldiers were and how so many had lied about their age in order to serve, especially in WW1.

Heidi Litke wondered if there were any memorials to animals that served in the war.  She explained that her grandfather, Harold Fryer, served with a German shepherd, Sgt Rex, in the 1st Battalion Dufferin and Haldimand Rifles.  Fryer survived, Rex was killed on duty on September 7, 1943.  “I always think about the animals,” Heidi said.  Good point.  None of us were aware of any memorials to serving animals on the island.

Lunch at The Catch in West Point.

One more memorial reminder occurred when Stewart Gillcash of O’Leary came to the restaurant to meet Pieter.  Last fall, Pieter had placed flags on the grave of Stewart’s uncle, Carman GILLCASH, who is buried at the Canadian War Cemetery in Holten.  The Gillcash family had provided photos and a brief story about Stewart’s uncle for the Faces To Graves Project in The Netherlands.  Everyone was delighted to meet him.

Rob Litke summed up the day.  “You don’t have to go far.  Every community has a monument of the people they lost in war.”

If you have photos or information to share on soldiers from the Cenotaph outside the Borden-Carleton Legion, or soldiers buried in The Netherlands, please email him at dariadv@yahoo.ca. Comments or stories?  You can share them by email or by commenting on this blog.

2 thoughts on “On the War Memorial Trail…..In Prince County, PEI”