October 1, 2017.  After visiting the cemeteries and Vimy Memorial to honour the memories of the soldiers on the Cenotaph outside the Borden-Carleton Legion who perished in the area around Arras, we went to our “local” café for the past few days, L’Eurostar Café Brasserie, for a well-deserved rest and final meal before leaving the area. 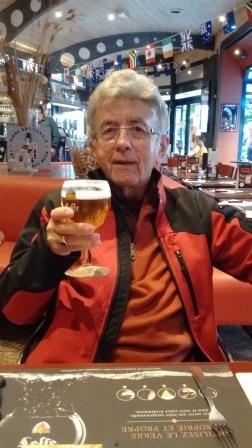 In France, dinner is not served before 7 pm.  Normally that wasn’t a problem for us as we would arrive at a restaurant completely exhausted long after 7 pm, but after the success in finally finding Manitoba Cemetery we arrived back in Arras in the late afternoon, and decided to have an early dinner before packing up to leave the area in the morning.

We arrived at the café at 5:45 pm only to be told the kitchen didn’t open before 7 pm.  We were too tired to go back to the hotel and come back later, so we ordered an appetizer, camembert cheese of course in honour of our host country, and a drink and relaxed until the chef appeared, right on the dot of 7 pm.

Since we had all this time to relax and reflect on our journey so far, I asked Pieter how he felt.  He said that, for him, “visiting the graves made things come full circle.  You start off with a name on the Cenotaph.  Then you begin the research and read up on what happened.  Hopefully you get a photo and personal stories.  Now we’ve ended up where the person died after a very short life.”

Pieter thought a bit before he continued, “On the one side, I feel sorry they died so young.  On the other hand I feel honoured to be there to pay respects to them.  It makes me want to know more about them, now that I’ve visited their grave or memorial.”

We both agreed that for the soldiers without a photo the picture is not complete.  “When I stand by a grave at the cemetery and have a photo so I know how the person looked, then I can feel a connection,” Pieter explained.

“It’s especially sad for soldiers like Arthur Collett, buried in Grandcourt Road Cemetery, and James Cairns, buried in Manitoba Cemetery, that they are buried in cemeteries that get very few visitors. They are just a number.” Each identified grave lists the soldier’s name, unit, rank, and identification number.

We both also agreed that the gardeners and maintenance staff at the Commonwealth War Graves Commission do a fantastic job of keeping up the cemeteries.  Over the past days, we’ve handed out Canadian flag pins to anyone we’ve seen driving around in the white vans with CWGC written on them and they have been enthusiastically received.  Up to now, we hadn’t seen anyone in a cemetery itself, but the work they do in sometimes very difficult locations, such as Grandcourt Road Cemetery, is to be commended.

When Pieter began this project, World War I was just history to us, no different than the various dates and historical facts we learned in school over the years.  Now it’s become a story with real people, and along the way, we are meeting wonderful people who work hard to preserve the history that we have largely forgotten.

In the next blog entry we visit the ruins of Mount St. Eloi church before going on to Rouen to St. Sever Cemetery Extension. Do you have photos or information about James Cairns?  Does anyone know the family members who visited the grave of Ted Arsenault of Abrams Village? Comments or stories?  You can share them by emailing us at dariadv@yahoo.ca or by commenting on this blog.