December 29, 2020.  Social distancing has altered many of the activities we normally would participate in during the holidays.  In The Netherlands, a Christmas Eve tradition is to light candles by the graves of Allied soldiers and Dutch resistance fighters who are buried in one of the War Cemeteries or in a municipal cemetery.  On Christmas Eve 2020 this event still occurred, while respecting pandemic safety restrictions.

Remko de Jong, a resident of Makkum, coordinates the candle lighting ceremony in his village. He wrote to Pieter on December 24, and explained that “…Tonight I will participate again in the lights on war graves for the umpteenth year, only with the difference that this year I will do it alone with a photographer and our children help out. But no other people this year….”

38 airmen are buried in the Donia Protestant Church Cemetery in Makkum, which is located by Lake Ijsselmeer in the province of Friesland.  Most of the airmen’s bodies were recovered from the foot of the dikes surrounding Makkum, pushed there from the sea by winds blowing in from the southwest. Others were recovered by fishermen from Makkum who brought the corpses to their home port for burial.  (See https://www.zzairwar.nl/dossiers/954.html for more information.)

Candles were lit at the graves of Allied soldiers.  (Photo courtesy of Remco de Jong)

After the candle lighting, Remco wrote again, remarking that the evening was “…very cold but that’s what it is for December, along with a lot of wind….”  Due to the wind, no candle was placed at the memorial panel, honouring the crew of Halifax L9561, that had been installed in Wons last October. 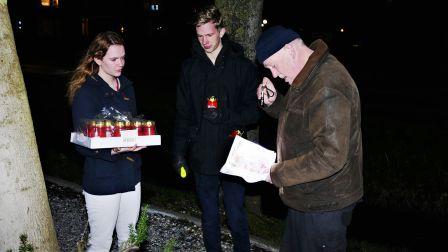 The Wonstelling was an 8 km long arched defence line in Friesland, set up to protect the entrance to the Afsluitdijk against attacks by the Germans in 1940.  Made up of soil and wood only, due to the limited time available for preparing a stronger fortification, it was insufficient protection against artillery fire and air raids.  On May 12, 1940, the Germans attacked, and during the battle Sgt Anema lost his life.  (For more information, available in Dutch, see: https://nl.wikipedia.org/wiki/Wonsstelling)

Grave of Sgt Wijbe Anema in Idsegahuizum, a small village in The Netherlands.  (Photo courtesy of Remco de Jong)

Remco explained that after the candles were placed in Makkum, a period of silence was held, and then “…afterwards, ‘White Christmas’, the Christmas song of the war, was played, and sounded softly across the cemetery. I close every year with this song....”  If you aren’t familiar with this song, you can listen to Bing Crosby singing it here: https://www.youtube.com/watch?v=IOkyBqGw2Wg 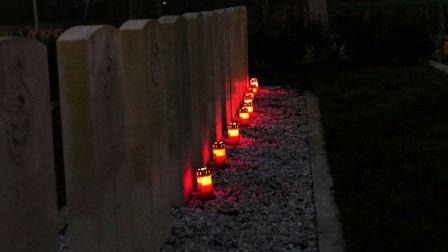 Over 7,600 Canadian soldiers are buried in The Netherlands!

Remco ended his account by noting that candle lighting occurred in cemeteries in The Netherlands, Belgium, France and Germany. “…375 cemeteries with 14,412 graves registered. Less than last year due to the coronavirus, but certainly still a great number…”

Kudos to the Dutch, who never forget the sacrifices made by Allied soldiers! There are over 7,600 Canadian soldiers buried in The Netherlands!  Thank you to Remco de Jong for sharing his photos and an account of the candle lighting done by himself and his family.

One thought on “Christmas Eve Candle Lighting In Makkum”