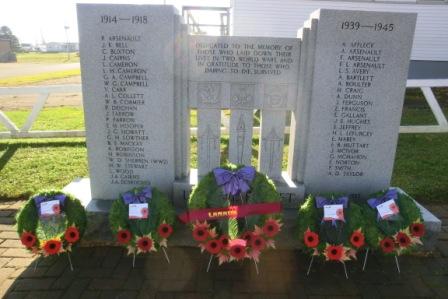 November 12, 2020. On November 11, a curtailed, but moving, Remembrance Day service was held outside the Borden-Carleton Legion, in front of the Cenotaph.  The weather was beautiful, unlike in past years!

Legion members line up as the names of those being remembered were read out.  (Photo credit: Daria Valkenburg)

Wreaths had been placed ahead of time, respecting Covid-19 safety measures.  Legion veterans gave the salute for the official wreaths, with Hon. Jamie Fox, MLA for District 19 Borden-Carleton giving the act of respect for the wreath laid on behalf of the Province of Prince Edward Island.

After the official wreaths were noted, names were read out ‘in memory of’ for the other wreaths and crosses, and as each name was read out, a Legion member raised the wreath or cross up from its position of lying on the ground.

Pieter Valkenburg wore a clear-window mask as a gesture of inclusiveness and respect for those who need to see a person’s face in order to communicate.  (Photo credit: Daria Valkenburg)

The service was well-organized and put together with a small number of volunteers.

Remembrance Day may be over for this year, but the work of remembrance of those who served continues.  If you have photos or information to share, please email Pieter at dariadv@yahoo.ca or comment on the blog.