April 5, 2020. Sometimes strange mishaps happen.  You’d expect that a seaman serving in Halifax would either be safe or, at worst, lose his life at sea.  But that’s not what happened to Singleton Charles JEFFERY! 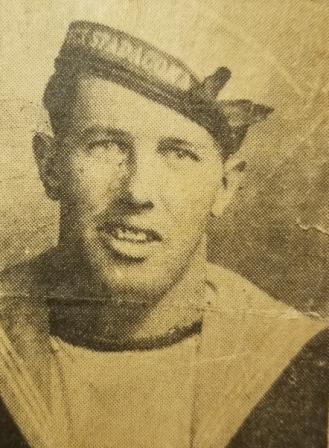 Singleton Charles Jeffery.  (Photo courtesy of May 17, 1941 edition of The Charlottetown Guardian, submitted by Mitch MacDonald. )

Jeffery was born on May 13, 1917 in Bayfield, New Brunswick, the son of Stephen and Alice Jeffery, and grew up in Cape Traverse.  After his father died, his mother remarried, to James Campbell.  A fisherman on the Island in pre-war years, he also worked as a seaman for Imperial Oil in Halifax, transporting oil, before enlisting with the Royal Canadian Naval Reserve in Halifax on May 5, 1940, Jeffery was also one of the few servicemen listed on the Cenotaph outside the Borden-Carleton Legion who was married and had children.  He married a few months after enlistment and, with his wife Mildred Catharina, had two children: Betty Patricia and Diane May.

While Jeffery served aboard Navy ships in the Atlantic Ocean, his family lived in Halifax, where he was based.  On the evening of December 1, 1943, while stationed at the H.M.C.S. ‘Stadacona’ navy base as a patrolman, he was fatally hit by a tram in Halifax.  (For more information on H.M.C.S. ‘Stadacona’, see https://en.wikipedia.org/wiki/CFB_Halifax#Stadacona)

A Board of Inquiry on December 27, 1943 found that: “…There was contributory negligence on part of the street car operator and the deceased.  The operator was negligent in that he did not bring the street car to a full stop or slow down to a minimum speed and ring his bell to indicate to the would-be passengers that he was not making the regular stop…”

The Board noted that Jeffery was negligent in “…that he crowded so close to the street car tracks at a point twenty to thirty feet south of the regular stop that he was struck…”  The Board found that although Jeffery had “…consumed a considerable quantity of beer (ten glasses)…” he was not found to be drunk, but his “…judgment may have been impaired by effects of the beverage..”  An autopsy showed that he had a full stomach, indicating that he had eaten, and not just been drinking.

On December 29, 1943, during the Board of Inquiry, a witness who had been on the tram at the time of the accident testified that he did NOT hear the conductor sound the bell as the tram approached the stop. According to the customary practice, the tram operator was supposed to ring a bell if he was NOT going to stop and pick up passengers.  In his opinion, he believed that Jeffery “…thought the street car was going to stop and he started to go in front of it in order to cross the street….”

Another witness at the December 29, 1943 Board of Inquiry testified that he and another sailor had also been hit by the tram, but were not seriously injured.  He too explained that he was of the opinion that since the tram operator was slowing down “…we had the idea that he was stopping…” When asked if the tram operator had rung his bell to indicate he was not stopping, the answer was no.

A colleague of Jeffery had been with him at the Canteen testified that although both of them had drunk beer, neither was drunk.  He explained that after leaving the Canteen, Jeffery “…intended going to the Nova Scotian to a dance…”

In response to the inquiry by the Department of National Defence into the incident, on February 2, 1944, the Nova Scotia Light and Power Company, which operated the tram, wrote that according to the tram operator: “…when approaching the Navy entrance to the Wet Canteen, he noticed a group of sailors out on the streets and about the tracks. He sounded the gong and slowed down; the sailors cleared away for the passing of the tram, and he continued at slow speed.  When approximately 20 feet south of the point where the main group of sailors were standing, a man stumbled forward and struck the side of the right front corner post of the tram.  He was spun around and fell to the pavement on the western side of the tram tracks. Another sailor standing alongside the party who was struck attempted to grab him as he stumbled, but failed to reach him in time….”

While the Board of Inquiry had multiple witnesses testify that the tram operator’s actions gave the impression that he was going to stop and pick up the waiting servicemen, the final opinion by the District Pensions Advocate of the Department of Pensions and National Health of the Veterans Bureau concluded that “…I am of the opinion that the injuries sustained by Jeffery were due to his own negligence in either standing too close to the tram track and failing to remove himself when he should have seen the tram proceeding towards him, or in stepping closer to the track after the front of the tram had safely passed him.  I think it is significant that the front of the tram did not hit Jeffery.”

A victim of a tragic accident, Jeffery is buried at the Bedford Gate of Heaven cemetery in Nova Scotia, which we visited. 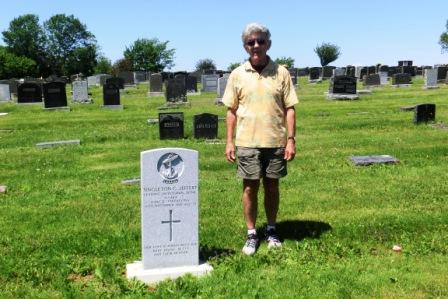 Pieter by the grave of Singleton Charles Jeffery at the Bedford Gate Of Heaven Cemetery. (Photo credit: Daria Valkenburg)

Pieter is still looking for a better photo of Singleton Charles Jeffery, as well as photos and information on the names listed on the Cenotaph outside the Borden-Carleton Legion.  If you have an item to share please contact Pieter at dariadv@yahoo.ca or comment on the blog.