October 6, 2019.  Next week, the long journey to providing a memorial panel to honour Flight Sgt Elmer Bagnall Muttart and the crew of Halifax L9561 will end with its unveiling in Wons on October 12.  (See Update For Those Intending To Go To The Netherlands For The Memorial Panel Unveiling In Wons To Honour the Crew of Halifax L9561)

This project, initiated by Pieter in 2017 after researching what happened to Muttart, one of the names on the Cenotaph outside the Borden-Carleton Legion, became possible with the help and support of the Missing Airmen Memorial Foundation, the Tryon & Area Historical Society that coordinated donations, and the many people who generously donated towards the preparation and installation of a memorial panel.  This project was given ongoing media coverage by the County Line Courier newspaper and CBC PEI, making it possible to tell the story of Elmer Muttart to Islanders.

Recently we met with the organizers from the Missing Airmen Memorial Foundation in Leeuwarden, who gave us a few hints about what to expect on October 12. 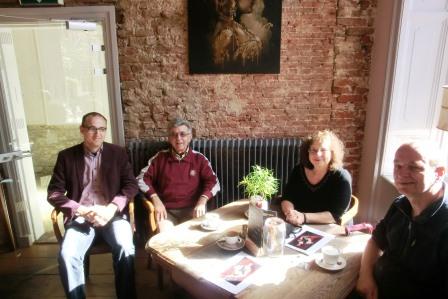 We get a few hints on what to expect on October 12! Left to right: Alexander Tuinhout, Pieter Valkenburg, Daria Valkenburg, Douwe Drijver.

Family of the crew of Halifax L9561 will meet in Leeuwarden before going to commemorative events in Harlingen and Wons. Representatives from the Dutch municipal government, the Canadian and British embassies, the Royal Canadian Legion in The Netherlands and Canada, the citizens of Wons, and the many researchers who worked so hard on this project will attend these special events that have been organized by the Missing Airmen Memorial Foundation, a non-profit organization of volunteers in Friesland dedicated to remembering the Allied flights that crashed in the province.

As so many Canadians are not aware of the efforts of the Missing Airmen Memorial Foundation, we invited them to explain a bit about their organization in a video clip about the story behind this upcoming event:

Excerpted translation of an article from the press release from the Missing Airmen Memorial Foundation:

On Saturday, October 12, 2019, it will be 78 years ago that an eyewitness in the Wons area saw Halifax L9561 “burning, sliding and zigzagging through the cloud cover”. The bomber with a crew of eight people left the English airport in Middleton Saint George an hour and a half earlier for a bombing of the port city of Bremen, but it never reached its target.

Above the North Sea the aircraft was already noticed by the German radar station “Tiger” on the island of Terschelling. Experienced fighter pilot Leopold “Poldi” Fellerer succeeded in shooting the Halifax shortly afterwards. The plane crashed just outside Wons at 10:17 p.m. 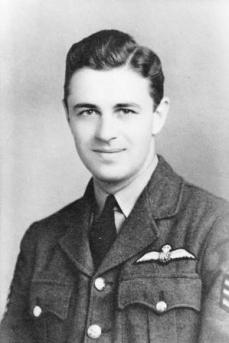 The next morning it became clear that 23-year-old Canadian pilot Elmer Bagnall Muttart did not survive the crash. “He was a gallant Captain and he died that we might live …” co-pilot Norman Trayler would later say about Muttart. The fact that the pilot was able to keep the damaged aircraft under control for a long time gave the remaining seven crew members the chance to escape from the burning bomber. All survivors fell into German captivity and only got their freedom back in 1945.

John Duffield from Oxford, a tail gunner, was admitted with serious injuries in the German section of Leeuwarden’s Boniface Hospital. He received regular visits to his sickbed from Poldi Fellerer and from Fellerer’s gunner Georg Lotze. In 1955 – fourteen years after the crash of the L9561 – Lotze, from Germany, even made an attempt to come into contact with Duffield again.

In his home country of Canada, fallen pilot Elmer Muttart has never been forgotten. His name is on the Borden-Carleton Cenotaph, a monument near his birthplace of Cape Traverse on Prince Edward Island. For a long time, the exact story behind Muttart’s death was unknown.  Dutch born Canadian Pieter Valkenburg, who lives on Prince Edward Island, delved into the history of all fallen soldiers on the Cenotaph and, as of 2016, delved into the life of Muttart. He soon joined forces with the Frisian based Missing Airmen Memorial Foundation (SMAMF), which has been investigating the air war over the province since the 1970s.

The initiative of Valkenburg and the Missing Airmen Memorial Foundation to permanently remember Elmer Muttart’s last flight with a memorial panel at the crash location becomes a reality on 12 October.“ 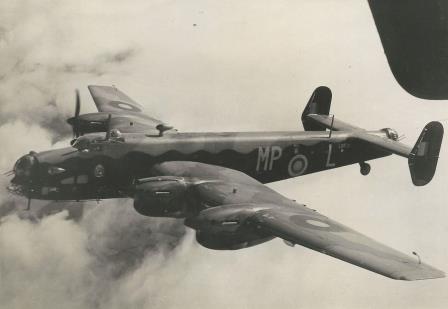 For those who wish to read the original Dutch, please see ( Onthulling informatiepaneel vliegtuigcrash Halifax L9561 in Wons )

Thank you to the Missing Airmen Memorial Foundation for sharing this article from their press release and allowing it to be translated into English.  An enormous thank you goes to Wendy Nattress, who graciously volunteered to do the post-production work on the short video explaining how the effort to place a memorial panel began. If anyone has more information to share on the Halifax L9561 crew, please contact Pieter at dariadv@yahoo.ca or comment on the blog.