October 6, 2017.  I was very much looking forward to the trip to Bayeux, but not for the cemetery.  Located 30 km northwest of Caen, where we were staying overnight, Bayeux is the home of the Bayeux Tapestry.  This is an embroidered cloth, dating from sometime in the 1070s, nearly 70 metres (230 ft) long and 50 centimetres (20 in) tall, which depicts the events leading up to the Norman conquest of England concerning William, Duke of Normandy (William The Conqueror), and Harold, Earl of Wessex, later King of England, and culminating in the Battle of Hastings in 1066.  This tapestry is hanging in the Musée de la Tapisserie de Bayeux (Bayeux Museum of Tapestry) in Bayeux.

Pieter’s ancestry goes back to Hamon de Masci, a cousin of William the Conqueror, and whose sons made the journey to England with him from Normandy as part of the conquest.  In the late 1500s, a descendant settled in The Netherlands and started a brick factory, and the rest is part of Valkenburg history.

Of course, when I excitedly mentioned what a great coincidence it was that we were going to Bayeux, a place I wanted to go anyway, Pieter looked at me in horror.  Why would we waste time looking at an old tapestry when we were here to visit a cemetery and had not much time after the trip to Rouen, that same day? No way! He reminded me that we still had to find our lodging in Caen and that I had been in a great deal of ‘distress’ (he was too polite to say ‘in a panic’) when we were driving in very busy Rouen.

So, with no chance at examining genealogical history, we went to Bayeux, paying an additional 5.50 euros in toll charges, followed shortly afterwards by another 3.50 euro toll, and stopped at the Bayeux War Cemetery in Bayeux, where George Ashley BARTLETT, another of the men on the Cenotaph outside the Borden-Carleton Legion is buried.

The Bayeux War Cemetery was the first one that had visitors at the same time we were there.  We weren’t alone!  We wondered if this was because it was a WWII cemetery.  All of our other visits had been to WW1 cemeteries and memorials.  It’s also the largest we’ve been to up to now, with 4,144 Commonwealth burials from WWII, 338 unidentified.  There are an additional 500 graves of other nationalities, most of them German.

The cemetery is in an urban setting, and across the street from the Bayeux Memorial, which honours the men of the British and Commonwealth land forces who fell in the early stages of the campaign in northwest Europe of 1945 and have no known grave.  Next to the Bayeux Memorial is the Battle of Normandy Memorial Museum (Musée Mémorial Bataille de Normandie) in Bayeux.  If you are interested in learning more about the D-Day Landing / Operation Overlord operations, plan a visit to Bayeux!  There were a lot of tour buses – from several European countries – and a lot of people walking around.

Sergeant George Ashley Bartlett was born in the Gaspé Peninsula, Quebec, on June 3, 1917, the son of Walter Philip Bartlett and Annie Alice Wright.  He enlisted with the North Nova Scotia Highlanders in Amherst in June 1940. In 1941, he married Leah Jean Campbell in Amherst, Nova Scotia, and they had a son John Ashley. 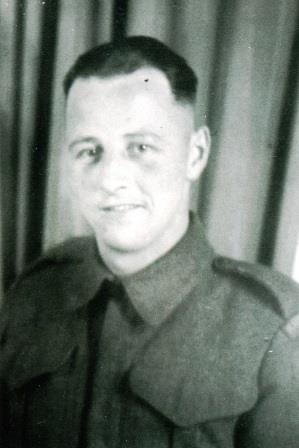 Bartlett survived the D-Day Landing, but then, on August 14, 1944 he was wounded in action during “Operation Tractable” to capture Falaise Ridge, and died the following day.  ‘Operation Tractable’, fought between August 14 and 21, 1944, was the final offensive conducted by Canadian and Polish troops, supported by one brigade of British tanks, as part of the Battle of Normandy during World War II.

Pieter at the grave of George Ashley Bartlett in Bayeux War Cemetery after laying down the flags of Canada, PEI, and Canada 150. (Photo credit: Daria Valkenburg)

At the time of his death, his wife and son were living in Crapaud.  Mrs. Bartlett remarried, to Ellsworth Wilson, a barber, but then she suffered a second tragedy.  Her young son drowned in March 1948 while she was at the hairdresser shop owned by the mother of Crapaud resident Gene Rogerson.  Gene recalled that young Ashley Bartlett had taken a toboggan to the nearby pond.

As for me and my dream of seeing the Bayeux Tapestry, I had the last word on this trip to the Bayeux War Cemetery.  As we walked to the car, which was parked at the Battle of Normandy Memorial Museum, I spotted a poster of the Bayeux Tapestry on the Museum wall and managed to convince Pieter to stand beside it.

Pieter by a poster of the Bayeux Tapestry outside the Battle of Normandy Memorial Museum in Bayeux. (Photo credit: Daria Valkenburg)

In the next blog entry we make our way to our last cemetery in France, to Leubringhen, just before the Belgian border. Do you have photo or info on George Bartlett?  Comments or stories?  You can share them by emailing us at dariadv@yahoo.ca or by commenting on this blog.